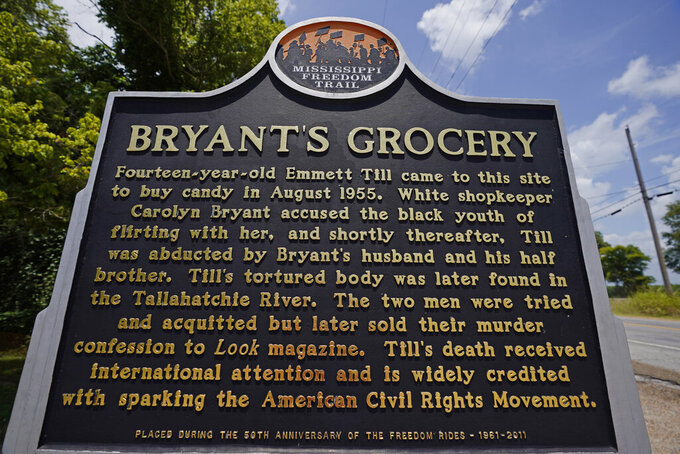 Rogelio V. Solis, ASSOCIATED PRESS
A Mississippi Freedom Trail marker sits before the remains of Bryant's Grocery and Meat Market in Money, Miss., July 14, 2021, where in 1955, Emmett Till, a 14-year-old African American teen, was accused of whistling at a white woman, at the family's store. Till was later kidnapped, beaten and killed. For more than a century, one of Mississippi’s largest and most elaborate Confederate monuments has looked out over the lawn at the courthouse in the center of Greenwood. It's a Black-majority city with a rich civil rights history. Officials voted last year to remove the statue, but little progress has been made to that end. (AP Photo/Rogelio V. Solis)

JACKSON, Miss. (AP) — An Emmett Till historical marker in the Mississippi Delta will be repaired or replaced after it was knocked off the pole that supports it, says the president of an advertising agency that made the sign.

Although a previous version of this metal sign was vandalized and another Till historical marker in the area was shot multiple times, Allan Hammons said Friday that he does not see malicious intent in the damage this time.

“It was not defaced in any way," Hammons told The Associated Press.

Till was a Black 14-year-old from Chicago who was abducted and killed in August 1955 while visiting relatives in Mississippi. Witnesses said he whistled at a white woman working in a store in the small community of Money, north of Greenwood. Days later, his body was pulled from the Tallahatchie River, where it was tossed after being weighted down with a cotton gin fan.

Till’s mother, Mamie Till Mobley, insisted on an open-casket funeral so people could see her son’s mutilated body. Jet magazine published photos, and his case became a catalyst for the civil rights movement.

An all-white jury acquitted the two white men charged in his death, but they later confessed in a paid interview with Look magazine.

The historical marker, part of the Mississippi Freedom Trail knocked down this week is outside the former Bryant’s Grocery & Meat Market in Money.

Hammons said railroad construction has been happening in the area and he thinks it’s possible that heavy equipment hit the pole and toppled the sign late Monday or early Tuesday. He said a Leflore County road crew put the sign into storage after finding it on the ground Tuesday.

The sign will be repaired or replaced, Hammons said. His firm, Hammons & Associates in Greenwood, has made metal signs to mark significant sites for civil rights and music.

The Greenwood City Council voted in July to put up a bronze statue of Till in that city. The killing of Till remains under federal investigation.

This story has been corrected to show the sign was toppled late Monday or early Tuesday and was found Tuesday.