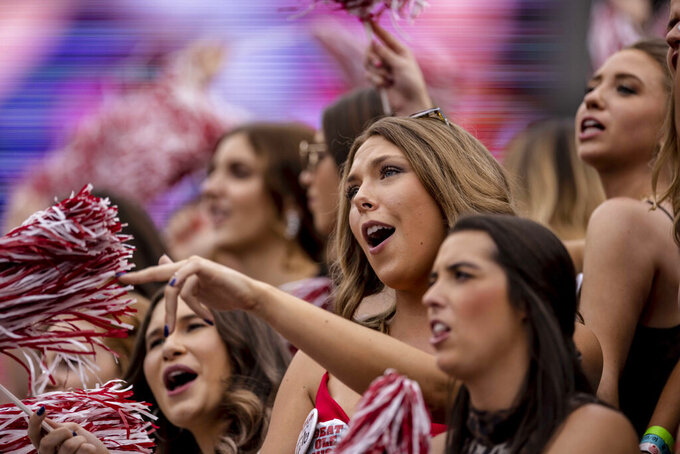 Vasha Hunt, ASSOCIATED PRESS
FILE - In this Saturday, Oct. 2, 2021, file photo, Alabama fans cheer during the first half of an NCAA college football game against Mississippi,, in Tuscaloosa, Ala. Faced with complaints about long concessions lines at Bryant-Denny Stadium, the school is adding an online ordering app for food and drinks and making other changes. (AP Photo/Vasha Hunt, File)

TUSCALOOSA, Ala. (AP) — Plagued by a shortage of stadium workers and complaints about long concession lines at home football games during the pandemic, the University of Alabama has contracted with an online app.

The school is also making other changes in hopes of speeding up service during Saturday's homecoming game against Tennessee.

With a capacity crowd of more than 101,000 expected, Alabama says fans can use the Waitr phone system to order food and drinks in Bryant-Denny Stadium. Fans will be notified when an order is ready, and will be able to pick up items at windows in the stadium.

The Alabama deal is Waitr's first for a football stadium, although baseball fans have used the app in Louisiana and Mississippi, said company spokesman Dean Turcol. It was used during spring games at Louisiana State University and summer minor league games in Biloxi, Mississippi, he said.

Other apps, including some specifically designed for such use, have been employed in stadiums for a variety of sports.

Alabama received complaints about long concession lines after its last home game against the University of Mississippi on Oct. 2. Athletics director Greg Byrne said part of the problem was the difficulty finding workers during the COVID-19 pandemic.

“Similar to staffing issues at the gates, an average of 40% of people who were supposed to work concessions on game days end up not showing up leaving them short-handed,” he wrote in a weekly email to supporters at the time.

Besides offering online ordering, the athletic department announced it is expecting additional workers to show up this week after adding multiple outside groups to the mix of workers. It said it is also streamlining menus and adding ordering technology to speed up sales.