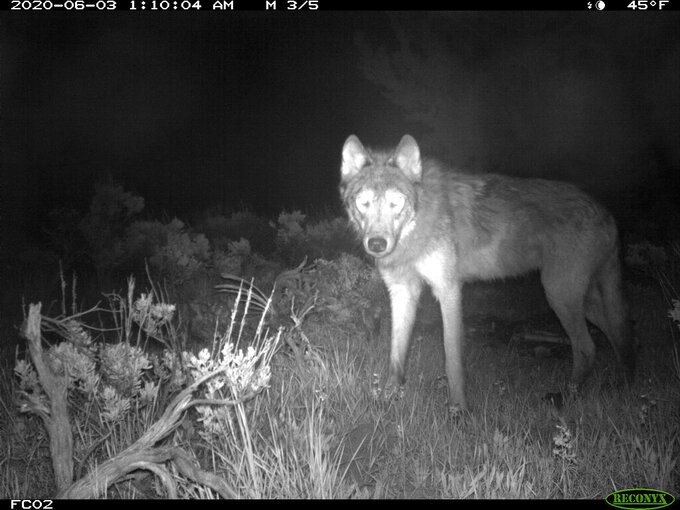 Uncredited, ASSOCIATED PRESS
FILE - This June 3, 2020, file image released by Colorado Parks and Wildlife shows a wolf on a CPW-owned game camera in Moffat County, Colo. Government attorneys are due before a federal judge to defend a decision from the waning days of the Trump administration to lift protections for gray wolves across most of the U.S. (Colorado Parks and Wildlife via AP, File)

DENVER (AP) — While gray wolves are under pressure from a federal delisting and increased hunting in some Rocky Mountain states, Colorado wildlife officials heard a number of detailed options Thursday for implementing a voter-approved reintroduction of the species west of the Continental Divide.

The highlights of ongoing work by a Colorado Parks and Wildlife task force come as advocacy groups fight to restore federal protections for wolves and as hunting restrictions in some some states, including Idaho and Montana, have been eased, producing increased wolf kills and outraging wildlife advocates.

Colorado voters last year narrowly approved a ballot initiative to reintroduce wolves on public lands in the sparsely populated Western Slope by 2023. The predator species was hunted to extinction in Colorado by the 1940s. Advocates say reintroduction will reestablish a swath of wolf habitat that once stretched from Canada to Mexico.

At a meeting in the southeastern town of Lamar, Colorado Parks and Wildlife commissioners heard key points of reintroduction options studied by a technical working group composed of officials from various federal agencies, wolf experts from Oregon and Montana, and local government and academic organizations.

Among the group’s findings:

--Flexibility in sourcing, with a preference for bringing in wolves from Idaho, Montana and Wyoming. A handful of gray wolves have appeared in northern Colorado in recent years, likely roaming southward from packs in Yellowstone National Park in Wyoming.

--Fitting wolves released in Colorado with GPS collars to monitor the formation and distribution of individual wolf packs and gauge progress toward a self-sustaining population.

--Careful selection of release sites with adequate prey, low livestock populations and away from population centers and roads. Eric Odell, a working group member and Colorado Parks and Wildlife's species conservation program manager, said the agency should consider reintroduction away from Colorado's borders and tribal lands to maintain management of wolves that can roam dozens, if not hundreds, of miles. Restricting the number of release sites — even just one — could promote reproduction and pack formation.

--A moderate pace of reintroduction of, perhaps, 10 to 15 wolves per year for two to three years, with a pause to monitor progress.

--Over time, wolves will spread on their own, with a possibility that most of Colorado would see wolves over a decade.

Where to bring in wolves is key for many respondents. According to Keystone, some participants suggested the western part of Rocky Mountain National Park, though the park is significantly smaller than Yellowstone, where wolves were introduced in the 1990s.

About 2,000 wolves are in Montana, Wyoming, Idaho, Oregon, Washington and northern California. A remnant population in the western Great Lakes region has since expanded to about 4,400 wolves in Michigan, Minnesota and Wisconsin. A small population of Mexican gray wolves remains protected in the Southwest.

The Trump administration ended Endangered Species Act protections for gray wolves in most of the U.S. last year, putting states and tribes in charge of overseeing the predators. Gray wolves in Colorado are listed as a state endangered species and may not be killed for any reason other than self-defense.