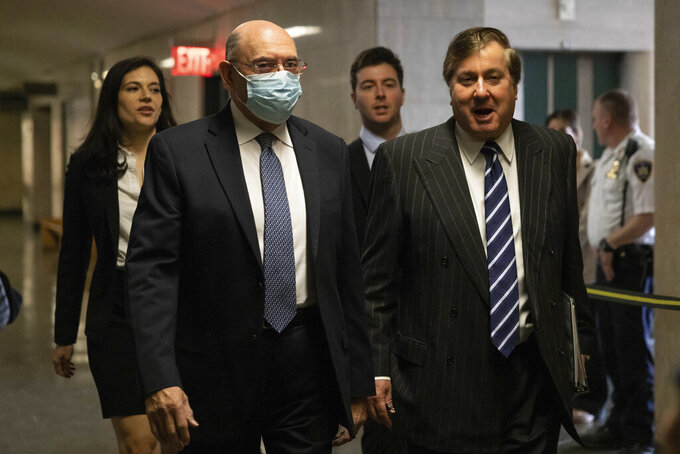 Allen Weisselberg, the company’s longtime finance chief, and Jeffrey McConney, a senior vice president and controller, testified for the bulk of the prosecution’s eight-day case, bringing the drama of their own admitted wrongdoing to a trial heavy on numbers, spreadsheets, tax returns and payroll records.

Weisselberg, who pleaded guilty in August to dodging taxes on $1.7 million in extras, was required to testify as a prosecution witness as part of a plea deal in exchange for a promised sentence of five months in jail. McConney was granted immunity to testify.

Donald Bender, a partner at Mazars USA LLP, said McConney would call him “numerous times” a week about various tax issues and that he got emails from Weisselberg so often, he even made time to respond while away in the mountains or vacationing in Paris.

Bender said he interacted with far less frequently with Trump, his biggest client — attending his 2005 wedding, but otherwise talking to him maybe a couple times a year.

Once Trump became president in 2017, Bender said he'd visit him twice a year at the White House so he could sign his tax extensions and returns — but those trips ended when the COVID-19 pandemic began.

Trump blamed Bender and Mazars for the company’s troubles, writing on his Truth Social platform last week: “The highly paid accounting firm should have routinely picked these things up - we relied on them. VERY UNFAIR!”

Prosecutors had considered calling the accountant, even prepping him for six hours during a Zoom conference on Saturday, but decided to leave him for the defense. Bender's testimony will continue Tuesday.

Prosecutors called just three other witnesses: the Trump Organization's accounts payable supervisor, a forensic accountant for the Manhattan district attorney's office, and a state tax auditor who investigated Weisselberg's taxes. The auditor was on the witness stand Monday.

Weisselberg, now a senior adviser at the company, testified last week that he conspired with McConney, his subordinate, to hide more than a decade’s worth of extras from his taxable income, but that neither Trump nor the family were involved.

McConney testified that Weisselberg and another executive, Michael Calamari Sr., leaned on him over the years to fudge payroll records to hide extras such as Manhattan apartments and Mercedes-Benz cars from their taxable income, in part by reducing their salaries by the cost of those perks and issuing falsified W-2 forms.

Manhattan prosecutors allege that the Trump Organization helped top executives avoid paying taxes on company-paid perks and that it is liable for Weisselberg’s wrongdoing because he was a “high managerial agent” acting on its behalf.

The tax fraud case is the only trial to arise from the Manhattan district attorney’s three-year investigation of Trump and his business practices. If convicted, the company could be fined more than $1 million and face difficulty making deals.

Bender's firm, Mazars, cut ties with Trump in February and said annual financial statements it prepared for him “should no longer be relied upon” after New York Attorney General Letitia James said the statements regularly misstated the value of assets.

James filed a lawsuit in September accusing Trump and his company of padding his net worth by billions of dollars and habitually misleading banks and others about the value of assets such as golf courses, hotels and his Mar-a-Lago estate.

Trump's financial statements are not a part of the criminal case.