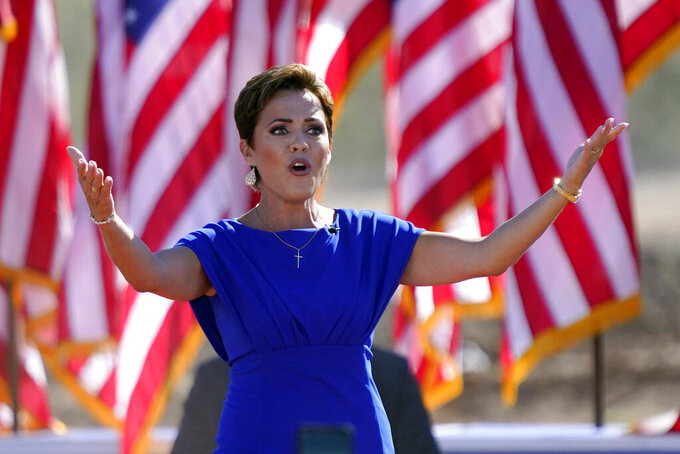 Matt York, ASSOCIATED PRESS
FILE - Arizona Republican gubernatorial candidate Kari Lake arrives to a rally with former President Donald Trump on Oct. 9, 2022, in Mesa, Ariz. The Republicans running for Arizona's three top statewide offices have said they would not have signed off on the presidential results if they had held office in 2020 and have signaled that they want to overhaul the battleground state's elections.(AP Photo/Matt York, File)

PHOENIX (AP) — A judge on Monday blocked a rural Arizona county's plan to conduct a full hand-count of ballots from the current election — a measure requested by Republican officials who expressed unfounded concerns that vote-counting machines are untrustworthy.

The ruling from Pima County Superior Court Judge Casey F. McGinley came after a full-day hearing on Friday during which opponents presented their case and called witnesses. An appeal of the judge's decision is likely. Election Day is Tuesday.

McGinley said the county board of supervisors overstepped its legal authority by ordering the county recorder to count all the ballots cast in the election that concludes on Tuesday rather than the small sample required by state law.

The opponents who sued to stop the proposed hand-count — a group called the Arizona Alliance for Retired Americans — argued that state law only allows a small hand-count of early ballots to ensure the counting machines are accurate. Group members argued that a last-minute change would create chaos and potentially delay certification of the election results. Cochise County Elections Director Lisa Marra also opposed the plan for the expanded count and testified about how it could delay results and imperil ballot security.

The lawsuit only challenged a full hand-count of an estimated 30,000 early ballots, but the ruling went further by blocking hand-counts of both the early ballots and those cast on Election Day.

McGinley wrote that state election laws lay out a detailed procedure for randomly choosing which Election Day ballots are chosen for the standard hand-count.

“This entire process would be rendered superfluous if the court were to construe (that section) to initially select 100% of the precinct ballots as its starting point,” the judge wrote. “Because the statute does not permit elections officials to begin the precinct hand-count by counting all ballots cast, the Board’s requirement that elections officials do so here is unlawful."

The process for early ballots has different rules, but specifically says it must stop once that small sample matches the machine count. That tally starts with 2% of the precincts or 5,000 ballots, whichever is less.

“Because the Board’s directive would require the initial audit of approximately 30,000 early ballots, it is not permitted by the plain language of (the law),” McGinley said.

The president of the retiree group, Saundra Cole, called the ruling a big win for the county's voters, especially retirees who often vote early.

“All voters have the right to cast a ballot that will be counted — in the most accurate way possible,” Cole said in a statement "Elected officials must follow the law and this ruling affirms the rule of law.

The push for hand-counts follows a barrage of attacks on ballot counting machines by former President Donald Trump and his allies following the 2020 election, who embraced various conspiracy theories. Election experts say machines are faster and more accurate than hand-counting votes. They are extensively tested and exhaustive reviews have found no issues with them.

Peggy Judd, one of the two Republicans on the three-member Cochise County board of supervisors who voted to hand-count all the ballots, said she did so because many of her constituents believed it was important.

“And I could have said that there's no evidence, but they said 'Can't we just do this? We want to volunteer, we want to do this,” Judd said. “What would it have hurt?”

She said she does not know if an appeal will happen, but if it does she does not want the taxpayers to cover her share.

“I am delighted to have a ruling to have something to go with,” Judd said. “I still am 100% positive that what were doing was OK and the right thing to do.

The board voted to go ahead despite opposition from the county's elected Republican attorney and the election director for Democratic Secretary of State Katie Hobbs. Both said a full hand-count of early ballots is illegal under state election law. Hobbs is running for governor.

Attorney General Mark Brnovich, a Republican, issued an informal opinion on Oct. 28 siding with the board.

Republican Cochise County Recorder David Stevens, who has been charged by the county board of supervisors with conducting the count, has never overseen a hand-count; that’s Marra’s role. She testified on Friday that she plans to conduct the normal post-election hand-count. She also criticized the method Stevens chose to use, saying it was error-prone.

The county and its attorneys relied on a section in the state Election Procedures Manual written by the secretary of state's office that allows counties to choose a larger number of early ballots for the hand-count audit, saying it gave them authority to do a 100% hand-count. McGinley said because that sentence wasn't in the actual election law it “runs afoul of (the statute) and its requirement that the initial hand-count audit not exceed a review of 5,000 ballots.”

Stevens said he was surprised by that part of the ruling.

"The procedures manual was developed and written with the help of the recorders and election directors, approved by the secretary of secretary of state, approved by the governor and attorney general and now that line is illegal?" Stevens asked. “The court's ruled — what am I to do? I just find it odd that they can pick one line and say ‘that’s illegal.'"

Stevens, who along with the board was named as a defendant, said a decision on an appeal had not yet been made.

The two Republican Cochise County supervisors who voted in favor of the 100% hand-count rather than the small sample that is counted in every other election were pushed to do so by people who believe former President Donald Trump’s unfounded claims that fraud or problems with vote-counting machines led to his loss in 2020. The lone Democrat on the board opposed the hand-count.

A Nevada county is also pushing a full hand-count to mollify Trump supporters but is battling with the secretary of state over rules for the count, while leaders of another GOP-led Arizona county rejected a similar effort last week.

The hand-count would have covered four races chosen by lot: one statewide elected official, one federal race, one from the state legislature and a statewide ballot measure.

Marra testified that holding a full hand-count would imperil the county's certification of the election, which is set to happen by Nov. 22. That could delay the statewide certification, which is expected to trigger recounts because the threshold for mandatory recounts was greatly increased by the Legislature earlier this year. In a worst-case scenario, she said, that could lead to delays in seating newly elected officials in January.