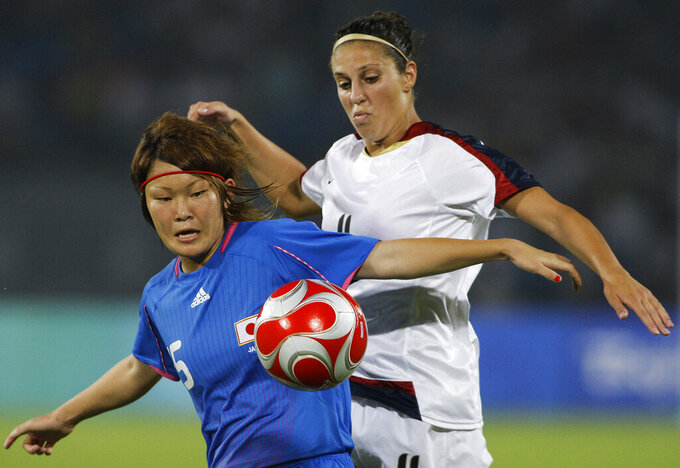 Petr David Josek, ASSOCIATED PRESS
FILE - In this Aug. 18, 2008, file photo, Carli Loyd, right, of the U.S., vies for the ball with Mizuho Sakaguchi, of Japan, during the Beijing 2008 Olympics women semifinals soccer match in Beijing. Older Olympians will be proving that age is just a number in Tokyo. Lloyd is going to be 39 when she plays for the U.S. women's soccer team, but she's not even the oldest soccer player competing this summer. Formiga, who plays for Brazil, is 43. (AP Photo/Petr David Josek, File)

SAITAMA, Japan (AP) — Nobody was kicking herself more than Carli Lloyd.

The veteran forward was lamenting her missed chances, even though the U.S. national team defeated New Zealand 6-1 in the group stage of the women's soccer tournament at the Tokyo Olympics.

It was typical of Lloyd, ever the perfectionist, after a match in which the Americans had four first-half goals disallowed for offside.

“I’m not proud of myself being offsides that many times. They were pretty decent goals, unfortunately, but we’ve got to better, I’ve got to do better, staying onside,” said Lloyd, who had two goals pulled back.

With the rout of the Ferns, the United States got back on track following a 3-0 loss to Sweden in the opener.

The Americans, ranked No. 1 in the world and the favorites to win the gold, were on shaky ground following the loss, which snapped a 44-game unbeaten streak. The victory over New Zealand helped but there's still one more group match on Tuesday. The United States faces Australia on Tuesday in Kashima.

Lloyd, at 39, is the oldest player on the U.S. team. She has a chance to add to her medal collection in her fourth Olympics.

At the 2008 Beijing Games, Lloyd scored in overtime in a 1-0 victory over Brazil in the final. Four years later, she scored both goals in the gold-medal match against Japan at Wembley Stadium, becoming the only player to score winning goals in consecutive Olympic finals.

But perhaps she's best known for her hat trick in the first 16 minutes of the 2015 World Cup final against Japan.

She's also known for her steely drive on a team that prides itself for a winning mentality — which was missing against Sweden.

“I’ve been a part of eight world championships, won four. I can tell you that we’ve won four because of a mentality. So that’s important,” she said following the victory over New Zealand. “This was a step in the right direction and I still think we have more to give. And it’s just the start.”

Lloyd was used as a “super sub” at the 2019 World Cup. At this Olympics, because of the condensed schedule, her role is less defined as the team juggles tired legs and recovery. She started against New Zealand after coming off the bench against Sweden.

There are 12 teams competing in Tokyo, divided into four groups. The top two finishers in each group and the top two third-place finishers advance to the knockout stage. The scoreline against New Zealand also helped if goal differential becomes a deciding factor for the United States.

The U.S women have been in this position before: The team dropped the opening match of the Beijing Games to Norway and still went on to win the gold medal.

New Zealand was a needed rebound, for sure, but the result was largely expected. The Ferns hadn't played for more than 16 months heading into the Games because of the coronavirus outbreak and its impact. New Zealand also gave the United States a pair of own-goals.

The Australians will be a bigger test. The Matildas defeated New Zealand in their opener before falling to Sweden 4-2 on Saturday night. They are tied on points with the Americans under the leading Swedes in Group G.

“You know, it’s not over," Australia captain Sam Kerr said. “We’ve got a chance to get to the U.S. They lost 3-nil to Sweden and we managed to score two goals against them. So we’ve just got to be positive."

While the U.S. plays Australia, Sweden and New Zealand will play in the other Group G match in Rifu.

In Group F, Brazil plays Zambia in Saitama and the Netherlands plays China in Yokohama. In Group E, Japan meets Chile in Rifu and Canada plays Britain in Kashima.