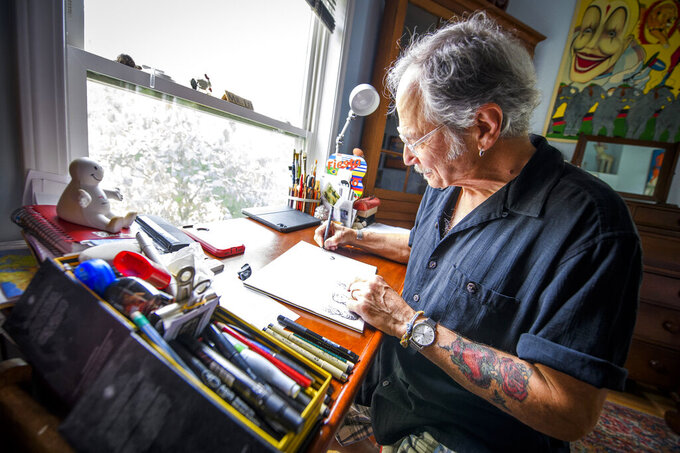 BLOOMINGTON, Ind. (AP) — In a twist of fate — something he’s become acquainted with — Bloomington artist Joe Lee’s personal history has led him to create a graphic novel he hopes will tell the story of a Holocaust survivor who forgave her tormentors.

The loss of two special people in Lee’s life inspired his first graphic novel, “Forgiveness: The story of Eva Kor, survivor of the Auschwitz twin experiments.”

“This is not exactly a story that hasn’t been told before,” Lee said recently while sitting in his backyard garden. “But this is a way I thought I could tell it.”

The first person was his father, Charles R. Lee, a disabled World War II who served as a mechanic in the Third Armored Division. Just a few days after Allied forces stormed the beach at Normandy, France, Charles Lee went ashore with bodies still rolling in the surf. He also fought at the Battle of the Bulge and helped liberate a Nazi concentration camp, where he saw stacks of corpses and prisoners who were barely alive.

“These ordinary soldiers were really impressed by the way he led,” Lee said.

By telling Eva Kor’s story, Lee feels he has reconnected with his late father. He’s watched documentary footage of local villagers walking to some of the concentration camps and their reaction to the horrors. Most of them were ignorant of what had happened.

“Their reaction to what was done in the camps was incredible,” Lee said.

Both Eva Kor and her twin sister, Miriam, lived through the horrors at Auschwitz II-Birkenau in Poland. The sisters were the only members of their family to survive and were part of Dr. Josef Mengele’s twin experiments.

“Nobody could randomly believe as horrible as it was that human beings were doing this to other human beings,” Lee said, adding that having people live normal lives so close to the concentration camps shows the “insanity of juxtapositions” that often happens during wartime.

Although Kor’s story, as well as those of other Holocaust survivors, has been told numerous times before in books and films, Lee hopes his graphic novel will reach a younger audience of high school and possibly junior high students.

Lee has been careful to ensure it’s Eva Kor’s voice that’s heard throughout.

That point is even more important since Kor is no longer here to tell her own story.

In July 2019, Lee was part of a small group that traveled to Poland to visit Auschwitz II-Birkenau with Kor. She had led such trips for years, sharing details of her life in the concentration camp as well as her eventual public forgiveness of the people who killed her family and held her and her sister captive.

Lee’s participation in the tour was due in large part to his wife, Bess, who advised him not to delay.

On the second day of the tour, Kor, 85, died. The group wasn’t told of her passing until the tour ended.

“They wanted us to get as much out of the experience as we could by being there,” Lee said. “They told us (of Kor’s death) on the bus back to Krakow. We understood that they wanted us to have that experience without the extra, added grief.”

But that wasn’t the last time Lee would hear Kor telling her story while at Auschwitz II-Birkenau. In early 2020, Lee again traveled to Poland to tour the concentration camp, this time as one of a select group using audio of Kor’s voice, compiled by officials at CANDLES Holocaust Museum and Education Center, the Terre Haute museum Kor established. This time Lee heard Kor’s voice throughout his visit.

That second tour cemented much of Kor’s history for Lee, something he has used in his graphic novel.

“Going with CANDLES is so special, to experience it with someone who lived it,” Lee said of the second trip.

He recalls standing on the selection platform, where Kor and her sister were separated from their family. “To stand in that place,” Lee said, shaking his head.

He also remembered standing between the gas chamber and the ruins of the other structures, looking toward the mansion where the camp commandant and his family lived. Lee was struck by the “insanity of juxtapositions.” In an ironic twist of fate, the gas chambers in Auschwitz I were converted into an air raid shelter after the war.

The experiences of Kor and the other people who survived or died in the concentration camps is horrific and Lee believes visiting the site adds dimension to people’s understanding of the Holocaust. It’s a story he said needs to be told, in many different ways to reach as many people as possible.

“It’s important to know about (the Holocaust) as much as you can,” he said. “We need to learn from it, not repeat it.”