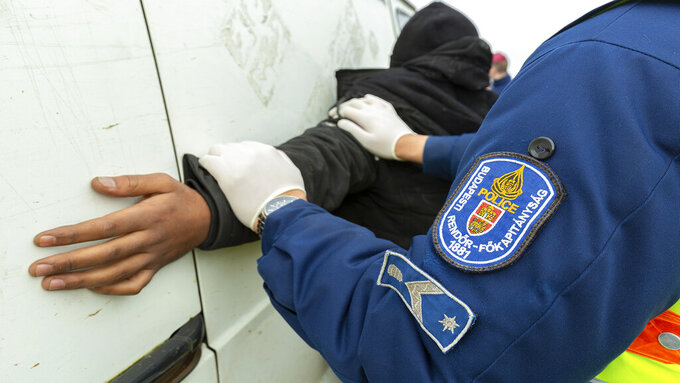 BUDAPEST, Hungary (AP) — Suspected people smugglers fired shots at Hungarian police from a van carrying migrants on Monday during and after a car chase that ended without injuries in the country's capital.

Two men were taken into custody in Budapest by Hungary's counterterrorism agents following the chase that began around 20 kilometers (12 miles) southeast of the city, police said in a statement.

The suspected people smugglers fired at police from a van with Hungarian license plates after refusing an order to pull over on the M5 highway near the town of Inarcs. Police continued the pursuit and the van was forced to stop on the outskirts of Budapest, after which the suspects fled into a forest and fired more shots at police.

A police officer fired a warning shot and then returned fire. The area was sealed off and the suspects, who claimed to be Iraqis, were apprehended about an hour after the chase began. No one was injured.

Police said 21 migrants who claimed Syrian citizenship were found in the van following the chase, and that the two suspects will be charged with people smuggling and violence against an official.

Follow all AP stories on global migration at https://apnews.com/hub/migration.