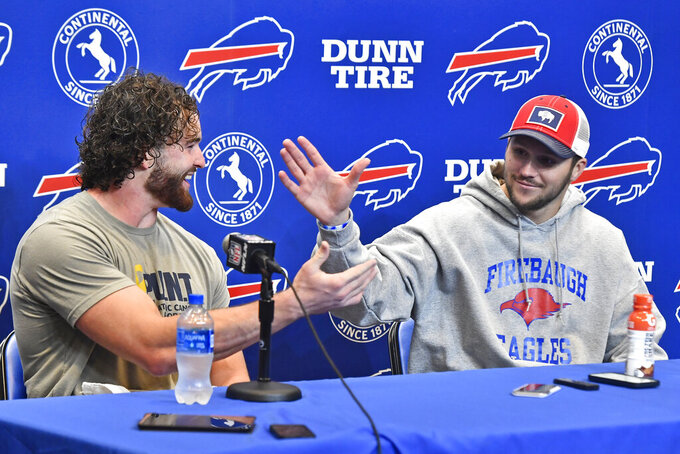 ORCHARD PARK, N.Y. (AP) — Josh Allen preferred to stay in the moment following the Bills’ latest rout rather than looking ahead to Buffalo’s next opponent: Patrick Mahomes and the Kansas City Chiefs.

“It’s no surprise that I think you guys are going to make a big deal out of it,” Allen said after a 40-0 win over the Houston Texans on Sunday. “But we won’t turn our attention to them until tomorrow.”

Try as Allen might to deflect, the showdown at Kansas City this Sunday night has been eagerly anticipated since the schedule was released.

The rematch of last season's AFC Championship game could be an early battle for conference supremacy. Even with the Chiefs off to a 2-2 start, the Bills (3-1) face the lingering question of whether they can finally close the gap on Kansas City.

While the Bills have run up scores against opponents' backup quarterbacks over the past three weeks, Mahomes is healthy and the Chiefs return many of the same players who handily defeated Buffalo twice last year, including a 38-24 win in January.

The degree of difficulty in Buffalo’s schedule steepens following a stretch in which the Bills outscored three opponents by a combined 118-21 after a season-opening 23-16 dud against Pittsburgh.

The Bills' defense has allowed a combined 615 yards while generating 12 takeaways and 10 sacks in blanking two of its past three opponents, including a 35-0 win over Miami.

But Miami’s Jacoby Brissett, Washington’s Taylor Heinicke and Houston rookie Davis Mills aren’t often included in the same conversation as Mahomes, who entered Monday leading the NFL with 14 TDs passing. He was second with a 119.6 passer rating and fourth with 1,218 yards passing.

The Bills' offense, meantime, has endured its share of sputters.

Buffalo is tied with Kansas City for second in the NFL in scoring with 134 points, but struggled to finish drives against Houston. The Bills settled for field goals on four trips inside the Texans 20 before scoring three touchdowns in the final quarter.

Allen has acknowledged difficulty finding his rhythm, especially early in games. All three of his turnovers (two interceptions and a lost fumble) have come in the first half, including Allen having his first pass sail off-target and intercepted by Houston’s Lonnie Johnson Jr.

The defense bailed him out by forcing the Texans to turn the ball over on downs at the Buffalo 6, but Allen can’t afford to make the same mistakes against Kansas City.

“Too many balls on the ground and in harm’s way through the air,” said Allen, who also recovered a fumbled snap. “Sometimes the defense is going to make plays, and we understand that. But have to try to limit those opportunities.”

The defense is making opposing punters work. Buffalo has forced five punts each in its first four games and 46 in its past eight regular-season outings going back to last season. Washington and Houston converted a combined 3 of 20 third-down opportunities.

Offense in the red zone. Buffalo has scored 12 touchdowns and settled for nine field goals on 21 drives inside an opponent’s 20.

With two touchdowns against Houston, third-year tight end Dawson Knox leads Buffalo with a career-high four scores, one fewer than his career total.

A day after being limited to two catches for 16 yards, receiver Cole Beasley turned to social media to criticize Bills fans for booing him because of his stance against vaccinations.

“Only place I get boo’d is at our home stadium,” Beasley wrote Monday.

It wasn't the first time the receiver has voiced his complaints on Twitter since vowing in July he would stop discussing the subject of vaccinations so as not to be a distraction.

Coach Sean McDermott declined to comment on Beasley's posts, and referred to Bills fan support as being unmatched around the league.

20 — Consecutive games in which the Bills have had 20 or more first downs, the longest active streak in the league and the longest since New England's 24-game streak spanning the 2016-17 seasons.