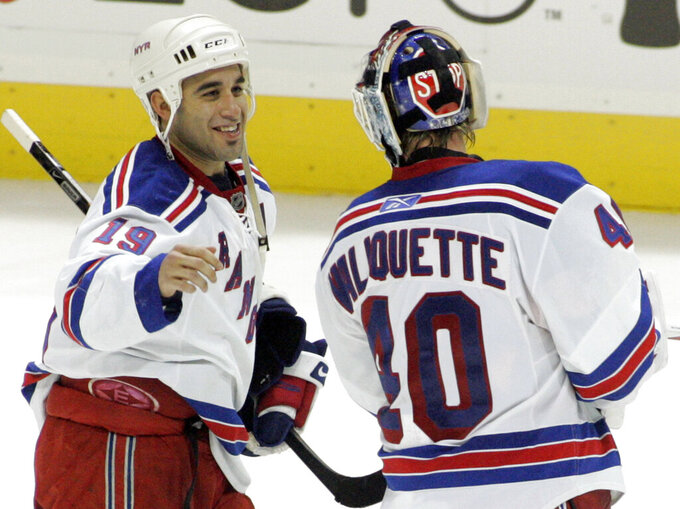 John Amis, ASSOCIATED PRESS
FILE - In this Wednesday, Dec. 10, 2008, file photo, New York Rangers' Scott Gomez (19) celebrates with goalie Steve Valiquette (40) after they beat the Atlanta Thrashers 3-2 in overtime in an NHL hockey game in Atlanta. Gomez scored the game-winning goal. Gomez was one of the first Latinos to reach the NHL in 1999 — Bill Guerin was the first — and he played 16 season for seven teams, winning the Stanley Cup twice with New Jersey. (AP Photo/John Amis, File) 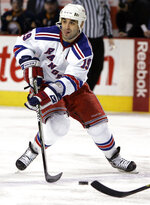 GLENDALE, Ariz. (AP) — Scott Gomez grew up among the diverse cultures that amalgamate around Anchorage, Alaska. Race was something he never really thought about, particularly on the ice.

The son of a Mexican American father and Colombian mother, Gomez heard a few disparaging remarks while coming up through the junior and professional ranks, but the occasions were rare.

He was a hockey player and that's all that mattered.

“The game was always accepting,” Gomez said. “When you're in that locker room, you're one of the boys. Sure, you're going to get the occasional off-color joke, but long as you give it back you're fine. It's never about race. It's about what you can do on the ice.”

Gomez was one of the first Latinos to reach the NHL in 1999 — Bill Guerin was the first — and he played 16 seasons for seven teams, winning the Stanley Cup twice with New Jersey.

The number of Latino players has increased across the NHL, minor leagues and colleges in recent years, including Auston Matthews, Max Pacioretty, Al Montoya and Raffi Torres.

More are on the way.

The NHL and teams across the league have made big pushes to tap a massive potential fan base and develop Latino players — in the United States and Mexico.

The Coyotes have been at the forefront of the push, starting in the front office.

The Coyotes, like other teams in the Southwest, play in markets with huge Latino populations and have developed programs to engage those communities.

Arizona created a Hispanic Advisory Board to improve relationships with the Hispanic community after Meruelo bought the team and has expanded its outreach.

The Coyotes have also created partnerships with Latino business associations and have gone into school districts with dense Latino populations to introduce kids to the Coyotes and hockey.

Arizona has held youth ball hockey clinics with organizations in areas with large Latino populations, bringing sticks and balls that kids can take home to continue their interest in the game. The Coyotes also have Spanish-language social media accounts to engage Latino fans.

“You think of Arizona, I absolutely have to go after the Latino community because they are the consumer base and they are continuing to grow, and they are the labor force and the business ownership,” Gutierrez said.

The efforts are growing outside the state as well.

The NHL launched a Spanish-language platform on its website in 2019, providing content from native Spanish-speaking reporters The league also began celebrating Hispanic/Latino Heritage Month to amplify the stories of people who have made contributions to the game.

The New Jersey Devils' Hockey in NJ program has strong support in Hispanic communities, as does the Philadelphia Flyers' Snider Hockey program and Tampa Bay's Lightning Made.

The Golden Knights have Spanish-language social media channels — as do the San Jose Sharks — and run street clinics in Hispanic communities.

The Los Angeles Kings created a model for their Jr. Kings program before playing exhibition games in Beijing in 2017 and have carried it into Mexico City. The program has expanded to 150 players and, during the pandemic, ran Zoom training with the club with question-and-answer sessions for the players, parents and coaches.

The peewee Jr. Kings won a national championship in their division and 15 players have been invited to the team's training camp in El Segundo, California, in August. The Kings also launched a ball hockey program with the 26 YMCAs across the city as part of their 50th anniversary in Los Angeles in 2019.

“It's diversifying our reach for and understanding in a place like Los Angeles, which is such a melting pot,” said Mike Altieri, the Kings' senior vice president of marketing, communications and content. “We had success in winning two Stanley Cups and being a very influential voice in the marketplace and we couldn't lose sight that there were opportunities for growth everywhere and we need to diversify our audience.”