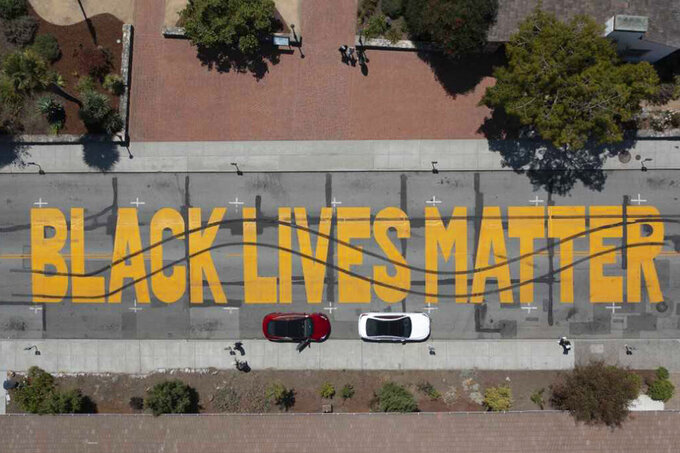 Uncredited, ASSOCIATED PRESS
In this aerial photo provided by the Santa Cruz Police Department is a Black Lives Matter Mural painted on a street that was vandalized in Santa Cruz, Calif., on Saturday, July 24, 2021. Police in Northern California have arrested two men over allegedly vandalizing the mural. The mural had recently been repainted in celebration of Juneteenth, the Santa Cruz Sentinel reported Sunday, July 25, 2021. (Santa Cruz Police Department via AP)

The men allegedly took turns performing burnouts with their vehicles along the mural on a downtown Santa Cruz street, defacing it with tire tread marks. The mural had recently been repainted in celebration of Juneteenth, the Santa Cruz Sentinel reported Sunday.

Santa Cruz police officers on Sunday arrested a 20-year-old and 19-year-old, both of Santa Cruz County, on charges of felony vandalism and conspiracy to commit a felony. Both were released on bail.

The 20-year-old did not immediately answer an email from The Associated Press seeking comment Monday.

A man who answered a phone listed for the 19-year-old and identified himself as his grandfather but wouldn't give his name said the defacing of the mural was not about race.

"They are kids, they did something stupid. They made a mistake,” he said. The man said his grandson has not yet hired an attorney.

Santa Cruz police are investigating the matter as a hate crime, the newspaper reported. In California, a hate crime enhancement could result in an additional year in state prison.

“The Black, the community at large, the people of color in our community felt this was a personal attack,” Santa Cruz Police Chief Andy Mills said. “Let’s face it, of the 5,000-plus street segments in our city, that was the only one? We can see what took place here.”

Hate crime laws are complicated and the police want to make sure they have a substantial case before pursuing further charges, Mills said.

Farther north in El Dorado County, Black Lives Matter Adopt-A-Highway signs were vandalized about a month after the group joined the program, the Sacramento Bee reported.

Three of the four Adopt-a-Highway signs placed with the text “Black Lives Matter” written on them were vandalized, Caltrans spokesperson Raquel Borrayo told the newspaper.

One of the signs had the text “Black Lives” crossed out while another was completely removed.

“It’s a means of intimidation, and it was specifically centered around Black lives,” Michelle Greene, the organizer and co-founder of Black Lives Matter El Dorado County, told KXTV-TV.

It is unknown who damaged the signs.