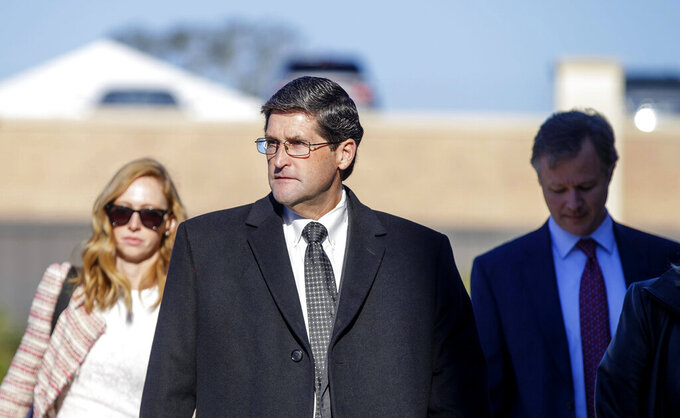 Federal prosecutors dropped 15 other charges when Strain pleaded guilty to a single count of bribery involving federal funds. Strain used his authority as sheriff to try to steer profits from a $1 million work-release contract to himself, his family and two of his top deputies.

Judge Jane Triche Milazzo can also order Strain to pay restitution when she sentences him, the plea agreement noted.

The corruption scheme involved an inmate work-release program that Strain made private. He then arranged to have two of his top deputies profit from it, hiding their involvement by having an adult child of each sign on as owners, according to Strain’s sworn statement.

Court documents in one deputy's plea agreement said he had been a child sex victim of Strain's, starting before he was 12 years old, The Times-Picayune / The New Orleans Advocate reported. That victim said that, as an adult, he had gone to work for Strain at the sheriff’s office when he was deeply in debt. The man said Strain pressured him to join the work-release scheme.

Strain's statement said the plotters also brought in a third person who had the credentials the deputies' children lacked and actually ran the program. That person had to pay $30,000 a year to a fourth person for a no-show job, according to the document.

The no-show job went to another victim of Strain's, the newspaper reported.

The deputies' children received nearly $1.4 million, funneling much of that back to their fathers, who paid off Strain, according to the court document.

The bribery charge carries up to 10 years in prison and a $250,000 fine. Milazzo scheduled sentencing for March 9.

Strain is to be sentenced Jan. 18 on the sex charges. Those include four counts of aggravated rape, which carries a mandatory life sentence.

Arthur “Buddy” Lemann, a defense attorney who is not involved in either case, told the newspaper that he thinks Strain will appeal the sex charges, especially since two of the rape charges involve incidents when Strain was a juvenile.

Strain also was convicted Nov. 8 on two counts of aggravated incest and one each of indecent behavior with a juvenile and sexual battery.

The incest charges carry sentences of up to 20 years.

This article has been corrected to show that the judge can order Strain to pay restitution, not that she has already done so.