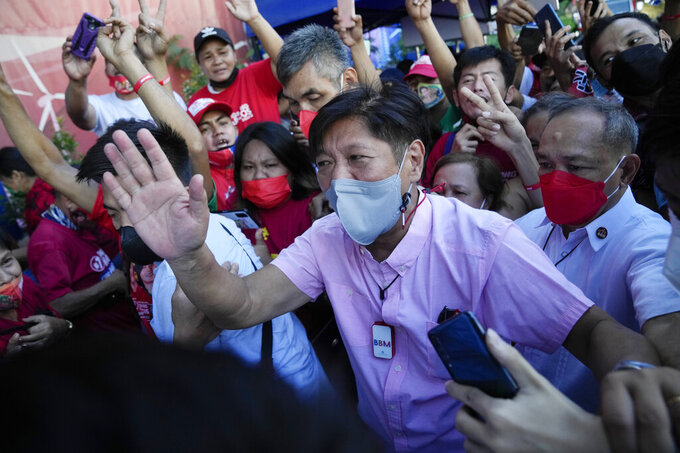 Aaron Favila, ASSOCIATED PRESS
Presidential candidate Ferdinand "Bongbong" Marcos Jr. greets the crowd as he celebrates outside his headquarters in Mandaluyong, Philippines on Wednesday, May 11, 2022. Marcos, the namesake son of longtime dictator Ferdinand Marcos, apparent landslide victory in the Philippine presidential election is raising immediate concerns about a further erosion of democracy in Asia and could complicate American efforts to blunt growing Chinese influence and power in the Pacific. (AP Photo/Aaron Favila)

Biden is among the first world leaders to recognize the electoral triumph of the namesake son of the ousted dictator, whose candidacy has alarmed human rights activists and pro-democracy groups.

“President Biden told him Washington is looking forward to working with him and cited the shared history of the longtime treaty allies,” Philippine Ambassador Jose Manuel Romualdez told The Associated Press, adding the two spoke for more than 10 minutes.

Biden also aims to expand cooperation on a wide range of issues, including the fight against COVID-19 outbreaks, the climate crisis, fostering economic growth and respect for human rights, according to a White House statement.

Marcos Jr. had more than 31 million votes in the unofficial count from Monday’s elections in what’s projected to be one of the strongest mandates for a Philippine president in decades. His vice presidential running mate, Sara Duterte, appeared to have also won by a landslide.

Marcos Jr. cited the robust relations between Manila and Washington and said his administration would work to continue building them. He invited Biden to attend his inauguration on June 30, but the U.S. leader said he was dealing with urgent concerns that may prompt him to stay in the U.S. and would instead send a high-level delegation, Romualdez said.

Marcos Jr.‘s declared victory Wednesday, saying it was a boost to democracy and promised to seek common ground across the political divide, his spokesman, Vic Rodriguez, said.

“To the world: Judge me not by my ancestors, but by my actions,” Rodriguez quoted him as saying.

The election outcome was an astonishing reversal of the army-backed but largely peaceful “People Power” uprising that ousted Marcos’s father in 1986 — a democratic triumph in Southeast Asia where authoritarian regimes flourish.

Marcos Jr., 64, campaigned on a vague national unity theme while avoiding volatile issues in an effort hard-line leftist groups and survivors of the elder Marcos’s dictatorship likened to whitewashing of his father’s crimes. On Tuesday, he appeared overcome with emotions while visiting his father’s grave, which was moved to the national heroes’ cemetery under current President Rodrigo Duterte.

Several of Marcos Jr.’s key election rivals have conceded defeat, though the closest, Vice President Leni Robredo, a human rights lawyer who ran on a promise of badly needed reforms, has only acknowledged his massive lead. The U.S. State Department said the elections and subsequent vote count followed international standards without any major incident.

The tabulated results still must be confirmed by Congress. Marcos Jr. and Sara Duterte would then start their single, six-year term leading a Southeast Asian nation battered by the COVID-19 pandemic, wealth inequality, Muslim and communist insurgencies, and political divisions, which were only inflamed by the turbulent presidencies of their fathers.

“At present, the China-Philippines relations are in a critical stage of development, facing important opportunities and broad prospects," Zhao told reporters Thursday at a daily briefing. "We attach great importance to the relations with the Philippine side, and we stand ready to work with the Philippines to adhere to good neighborliness and common development and further deepen our comprehensive strategic cooperative relations so as to benefit two countries and the two peoples.”

Marcos Jr. has said he wants to pursue closer ties with China, though Beijing during the outgoing Duterte’s presidency showed no willingness to compromise on their conflicting territorial claims in the South China Sea. It prompted Manila to lodge an unusually large number of diplomatic protests against Beijing over China’s increasingly aggressive actions in the busy waterway.