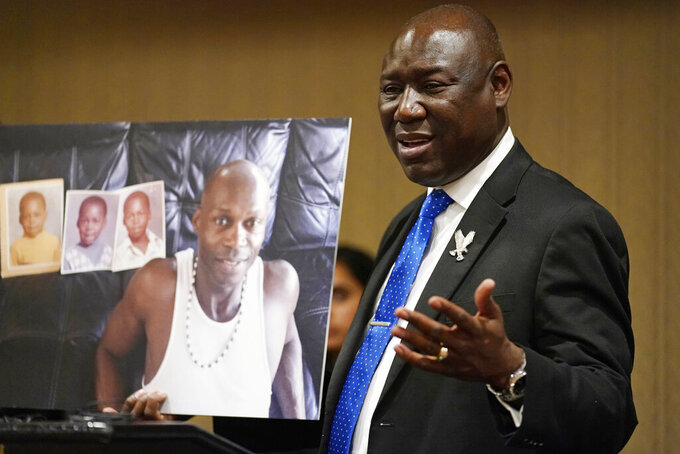 John Locher, ASSOCIATED PRESS
Attorney Ben Crump holds up a picture of Byron Williams during a news conference, Thursday, July 15, 2021, in Las Vegas. The family of 50-year-old Williams, whose death in Las Vegas police custody after a bicycle chase in 2019 was ruled a homicide, is suing the city and four officers they accuse of wrongful death and civil rights violations. (AP Photo/John Locher)

LAS VEGAS (AP) — Members of George Floyd’s family and their attorney said Thursday they support a federal excessive force, wrongful death and civil rights lawsuit filed this week in Nevada by relatives of a Black man who died in handcuffs after Las Vegas police chased him on a bicycle and on foot in 2019.

Ben Crump, an attorney now representing Williams’ family, represented Floyd's and Taylor's families and has been the voice for relatives of Trayvon Martin in Florida and Michael Brown near St. Louis.

At a news conference at a Las Vegas casino, Williams' family members sobbed remembering him; attorney Antonio Romanucci accused police of turning off body-worn cameras for 10 minutes to “come to an agreement about what the narrative should be;" and Crump counted the number of times Williams said he couldn’t breathe at 24.

“This is an important case here in Nevada," Crump said, and an illustration of an “urgent need for police reform” in the U.S.

“We want to expose this injustice to the world ... so that we can overcome this pattern and practice of police excessive use of force and implicit bias like we saw in Minnesota," Crump said. “Just like they gave George Floyd no consideration, no professionalism and no humanity, they did the same thing to Byron Williams.”

Officers pinned him face-first to the ground and handcuffed him, according to findings of a police investigation and clips of officer body camera footage shown publicly during a non-judicial airing of evidence in the case last October. Images showed one officer with his knee on Williams’ back.

“Ain’t no help coming for you. Stop crying,” the lawsuit quotes an unidentified officer saying on the recording, and another officer accusing Williams of “incarceritis,” or faking a medical ailment to avoid going to jail.

Crump noted the absence of bystander video, but said he and Romanucci and their legal team expect to unearth new evidence when police officers and others are called to testify under oath.

The lawsuit comes nearly a year to the day after Las Vegas police agreed to a record $2.2 million out-of-court settlement with the family of Tashii Brown, a Black man who was punched, hit with stun gun jolts and put in a neck restraint by a police officer outside a Las Vegas casino in 2017.

The officer in that case was fired and charged with involuntary manslaughter, but a grand jury refused to indict him.

The Williams family's case was filed Wednesday in U.S. District Court in Las Vegas on behalf of his nieces, Marcia Wells of Las Vegas and Teena Acree, a Navy veteran who lives near San Diego.

“We have asked, and continue to ask, for transparency,” Acree told reporters. “We have continued to ask the police department for unredacted video ... and we have not received all of that.”

“I served my country over 20 years. This is not what I expect,” she said.

Paramedics were summoned, but Williams was unconscious on the ground before they arrived, according to police reports. He was pronounced dead about an hour later at a hospital.

Police have said Williams had a history of criminal arrests and felony drug convictions in California and Nevada, and was on house arrest in a pending felony drug and forgery case in Las Vegas when patrol officers spotted him riding a bicycle shortly before dawn Sept. 5, 2019. His bicycle did not have a required light, police said. He was wearing an ankle bracelet tracking device when he died.

Williams pedaled away before abandoning the bike and leading two officers, Patrick Campbell and Benjamin Vazquez, on the foot chase over walls and into the courtyard of an apartment complex.

Clark County District Attorney Steve Wolfson declined to prosecute the officers involved in Williams’ chase and arrest, saying he found “no evidence of any intent to kill on the part of any officer.”

The department said last year that the officers had returned to their jobs.

Wolfson did not immediately respond Thursday to messages about the lawsuit and Crump’s criticism of the decision not to prosecute.