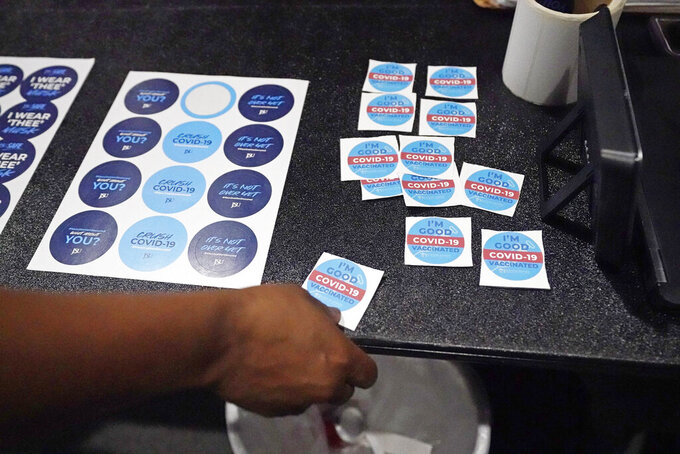 JACKSON, Miss. (AP) — Mississippi Gov. Tate Reeves does not plan to issue a mask mandate for schools, even as COVID-19 cases are proliferating in a state with one of the lowest vaccination rates in the nation.

“Governor Reeves has no intention of requiring students and staff to wear masks when they're in school this fall,” his spokeswoman, Bailey Martin, said in response to questions Tuesday.

A few Mississippi school districts have already started classes, and others are starting by mid-August. Some parents have raised concerns about the virus spreading among children too young to be vaccinated, and many school districts have said they will not require students or employees to wear masks because the governor has not set a mask mandate.

Reeves, a Republican, has been outside Mississippi for several days and has made few public statements about the pandemic, even as Republican governors in neighboring Arkansas and Alabama have been outspoken in promoting vaccination efforts.

Reeves's Twitter and Facebook pages posted photos Tuesday of the governor with one of his daughters in Orlando, Florida, where her club basketball team won a tournament. His recent social media posts also showed that Reeves attended a Republican Governors Association meeting last week in Colorado, then spoke Friday at an local Republican event in Orange County, Florida.

Reeves set a statewide mask mandate during August and September, then had mandates in counties with counties where the virus was spreading quickly. He lifted the last of the county mask mandates in early March, and his requirement for masks in schools expired when the academic year ended in May.

The Mississippi State Department of Health said Tuesday that a child younger than 18 has died of COVID-19. The department said details about the child’s death would be made available during a briefing Wednesday.

The state health officer, Dr. Thomas Dobbs, said Tuesday that intensive care units are filling up in some hospitals and COVID-19 outbreaks are expanding in nursing homes as the delta variant of the virus continues to spread rapidly.

“We are seeing more and more ICU capacity being extinguished,” Dobbs said in a video that the state Health Department posted online.

The state Health Department said Tuesday that 653 people were hospitalized with COVID-19 in Mississippi as of Monday, and 199 of them were in intensive care. Those are the highest hospitalization numbers since early February, before vaccinations were widely available.

The hospitalization numbers have increased sharply in recent weeks. On July 1, Mississippi had 113 people hospitalized with COVID-19, with 36 of them in intensive care.

Dobbs said Tuesday that dozens of Mississippi nursing homes had outbreaks as of Monday.

In Mississippi, nearly 79% of nursing home residents and 48% of nursing home staff had been vaccinated against COVID-19 by July 11, according to the most recent information posted by the Centers for Disease Control and Prevention. That compared to the national average of about 81% for residents and 58% for staff.

Dobbs had said last week that Mississippi is in a “4th wave” of virus cases, following previous waves in the spring and summer of 2020 and a larger wave of cases early this year before vaccines were widely available.

The Health Department said on its website Tuesday that 1,291 new cases of COVID-19 had been confirmed in Mississippi.

Since the beginning of the pandemic in the spring of 2020, Mississippi has reported more than 338,000 cases and more than 7,500 deaths from the virus.