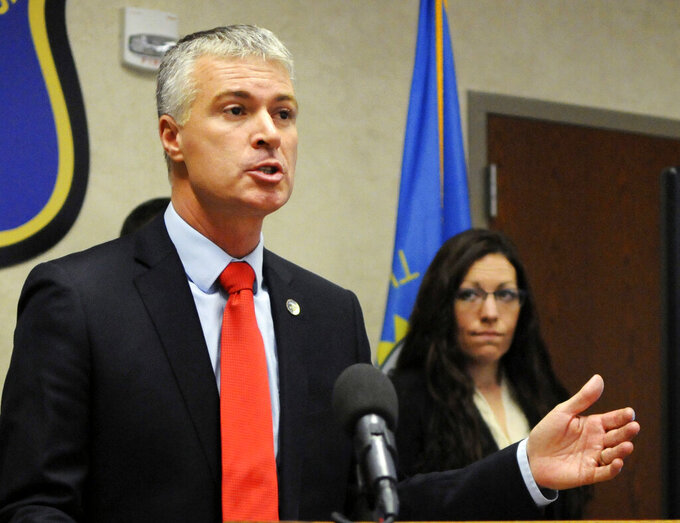 James Nord, ASSOCIATED PRESS
FILE - South Dakota Attorney General Marty Jackley, a Republican candidate for governor, unveils his legislative priorities in Sioux Falls on Jan. 3, 2018. South Dakota Republicans are meeting to choose candidates for attorney general and other offices, with the impeachment conviction and removal of Attorney General Jason Ravnsborg hanging over the convention in Watertown. Jackley and Division of Criminal Investigation Director David Natvig both want to be considered for the role. Voting for nominees is set for Saturday, June 25, 2022. (AP Photo/James Nord, File)

SIOUX FALLS, S.D. (AP) — South Dakota Republicans are meeting to choose candidates for attorney general, lieutenant governor and other statewide offices with the impeachment conviction and removal of Attorney General Jason Ravnsborg hanging over their convention in Watertown.

Former Attorney General Marty Jackley and Division of Criminal Investigation Director David Natvig both were spurred to pursue the job once Ravnsborg’s future was in doubt. Delegates also have to choose who they will nominate for secretary of state as well as try to draw a united platform after months of infighting at the Capitol.

Here are the contests to watch during the three-day convention that started Thursday, with delegates voting for nominees Saturday:

When Ravnsborg was facing calls for his resignation and impeachment last year for his conduct in a fatal car crash, Jackley seized on the opportunity and jumped into the contest for attorney general — a job he held for roughly a decade. He has the support of Republican Gov. Kristi Noem as well as much of the state's law enforcement community. He is a respected lawyer and a former U.S. attorney for South Dakota.

Natvig has cast himself as a “tough on crime” prosecutor with experience running the state's most important criminal investigations. But he didn't escape unscathed from Ravnsborg's impeachment. A former Division of Criminal Investigation agent, Brent Gromer, testified Tuesday that parts of Natvig's February testimony to a House committee were “not factual."

Natvig told the House impeachment investigation committee that an “innocuous conversation” with Ravnsborg and Gromer occurred three days after the fatal crash about the examination of cellphones. Natvig said though he was out of the room for parts of the conversation, “from what I heard, there was nothing that caused me concern.”

But Gromer said Tuesday that Ravnsborg asked what could be turned up by a forensic examination of his cellphones, and that made him feel uncomfortable because the Division of Criminal Investigation was not supposed to be involved in the case.

Jackley's name was also attached to an attention-grabbing legal matter in recent months.

He represented the state's richest man, T. Denny Sanford, as the Division of Criminal Investigation searched Sanford's digital devices for evidence of possession and distribution of child pornography. Jackley argued for Sanford at the state Supreme Court in his attempt to stop search warrants from being unsealed.

The attorney general's office indicated it would not pursue any state charges against Sanford, who is no longer represented by Jackley.

Lt. Gov. Larry Rhoden, who is closely allied with Noem and campaigns alongside her, faces a challenge from former House Speaker Steve Haugaard, who lost a primary campaign to Noem earlier this month.

Haugaard's bid, which materialized Friday, represents an effort from a group of hardline conservatives to wrest control of statewide offices from established politicians. He criticized Noem for not being conservative enough during their primary contest, but won less than 25% of the Republican vote.

Republican Secretary of State Steve Barnett is facing a challenge for the nomination from a candidate who has built her campaign around “election integrity." This comes amid a surge of concern among some conservatives about voter fraud following former President Donald Trump's false claims that the 2020 election was stolen.

Monae Johnson, who worked in the secretary of state's office before Barnett's tenure, says she is “answering the call of concerned citizens” to run. Her campaign centers around criticism of Bennett’s unsuccessful pushes to allow people to register online to vote and his decision to mail out applications for absentee voting during the pandemic.

PLATFORM, ADMISSION FEES AND OTHER CHALLENGES

The Republican Party overwhelmingly controls state politics, but there are many signs of strife. A hardline grassroots movement has been trying to challenge the party's old guard, and many party activists are coming off hard-fought primary elections earlier this month.

Even before the event began, some conservatives complained about the fees the Republican Party was charging for the convention. The party has said it is simply trying to cover costs, as well as counteract a spamming effort aimed at online registrations by charging a refundable $1 fee for Saturday's nominations.

But as the party's platform and nominees emerge, conflicts are likely to flare. No candidates have yet publicly announced challenges to incumbents holding offices including treasurer and auditor, but rules allow nominations to happen during the convention, adding an element of unpredictability to the contests.