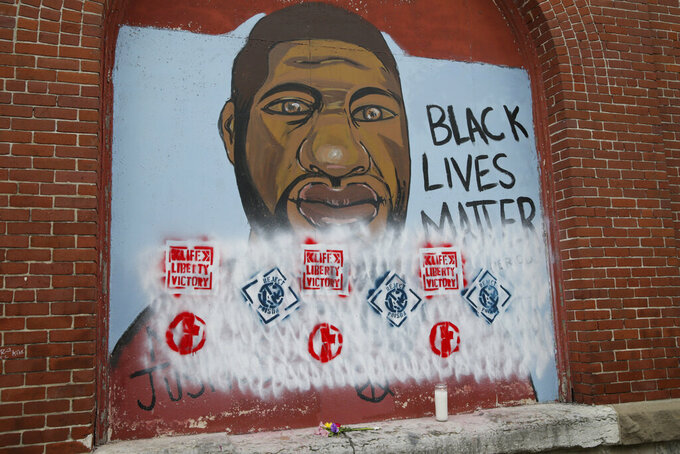 Nikos Frazier, ASSOCIATED PRESS
Stenciled logos are seen added to the George Floyd mural painted in the summer of 2020 at 6th and Ferry Streets, Monday, Aug. 9, 2021, in Lafayette, Ind. Local volunteers removed the logos a few days after they were discovered. After the mural was defaced on Aug. 9, a protective coating was added. (Nikos Frazier/Journal & Courier via AP) 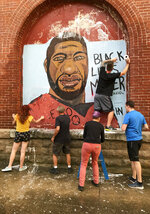 LAFAYETTE, Ind. (AP) — A mural of George Floyd has been defaced for the fourth time since it was painted in a northwest Indiana city last year to honor Floyd following his death in Minneapolis police custody.

Lafayette police said two white males were seen throwing a bucket of white paint about 6 p.m. Monday at the mural in the city's downtown. A woman who witnessed the vandalism confronted the pair and they ran from the scene, police said.

The incident marked the fourth time the mural of Floyd has been defaced since it was painted on the side of a brick building in June 2020 with the prominent wording “Black Lives Matter."

After the mural was defaced on Aug. 9, a protective coating was added.

Following Monday's incident, volunteers gathered and began cleaning the mural before the paint could dry, and the Lafayette Fire Department then hosed it down to remove the white paint, the Journal & Courier reported.

Police said the mural's latest defacing remains under investigation in the city about 65 miles (105 kilometers) northwest of Indianapolis.

Former Minneapolis police Officer Derek Chauvin was convicted in April of murder in Floyd's May 2020 death. Chauvin, who is white, held his knee to Floyd’s neck as the 46-year-old Black man was handcuffed and face down on a street.

Chauvin was sentenced to 22 1/2 years in prison in the Floyd's death.