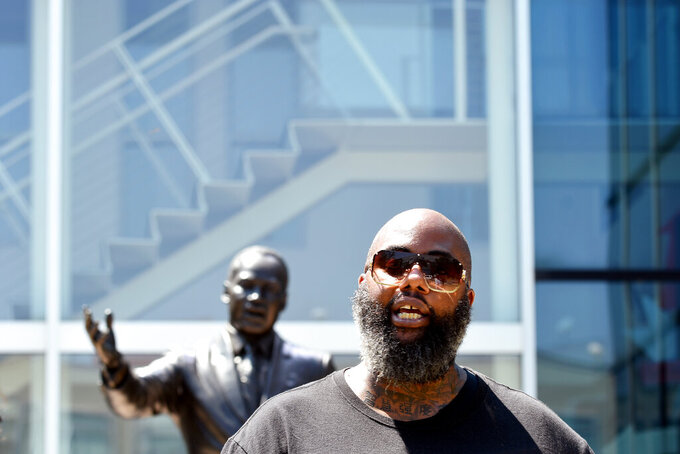 Thomas Peipert, ASSOCIATED PRESS
Community activist Jason McBride speaks during a news conference in Aurora, Colo., on Wednesday, July 28, 2021. Local activists and former members of Aurora's community police task force gathered to call attention to police brutality. Aurora police announced Monday that an officer was arrested after video showed him using his pistol to beat a man he was trying to take into custody, choking him and threatening to kill him, while another officer was accused of failing to stop her colleague. (AP Photo/Thomas Peipert)

AURORA, Colo. (AP) — A video showing a police officer pistol-whipping and choking a Black man during an arrest in a Denver suburb has reignited anger over policing in the community, with activists decrying what they say is just the latest example of the mistreatment of people of color.

Aurora Officer John Haubert was arrested on suspicion of attempted first-degree assault, second-degree assault and felony menacing charges, after officers responded Friday to a trespassing report where they found Kyle Vinson, who is biracial and identifies as Black.

Haubert's lawyer, Reid Elkus, has vowed to “zealously defend” him. Another officer is accused of not intervening to try to stop him.

The body camera footage shows Haubert hold his pistol to Vinson’s head, strike him with it, choke him and threaten to shoot him.

“You’re killing me,” Vinson cried, gasping for air, as Haubert holds him down, the video shows. “If you move, I will shoot you,” Haubert said.

The footage angered activists on Wednesday. They want to bring attention to a police department plagued by allegations of misconduct in recent years, including the 2019 death of Elijah McClain.

McClain was walking down a street in the city east of Denver in August 2019 when he was stopped by local police after a 911 call reported a suspicious man. The 23-year-old Black man was wrestled to the ground, put into a neckhold and injected with 500 milligrams (0.02 ounces) of ketamine by paramedics. McClain died less than a week later.

No officers were charged in that case but Democratic Gov. Jared Polis asked Attorney General Phil Weiser to reinvestigate whether anyone should be prosecuted after the case drew renewed attention following the killing of George Floyd. The investigation is still pending.

Last year, the Police Department also came under fire for an incident where four Black girls were handcuffed and ordered face down in a parking lot after a stolen car mix-up.

“This isn’t about just Elijah or just about Kyle. This is about the community at whole,” said Lindsay Minter, a high school track coach and member of the city’s police task force. “When I talk to the kids that I coach, they’re always like ‘If you come into Aurora, you leave on probation.’ Period. They don’t feel safe.”

Police Chief Vanessa Wilson called Vinson's case an “anomaly” on Tuesday and asked the public not to paint the department “with a broad brush.” She put the officers on leave and denounced Vinson’s treatment as a “very despicable act.”

Rathod praised her for trying to change the department but blamed Mayor Mike Coffman for not denouncing what happened or apologizing to Vinson. He called on Coffman to resign.

Vinson’s lawyer, Siddhartha Rathod, whose law firm also represents McClain’s mother in a lawsuit against Aurora, said the city has a long history of failing to discipline is officers for misconduct.

In a tweet, Coffman said he did not think it was appropriate for him to comment until the investigation is complete.

“The time has come for a leader who will stand up for communities of color and stand against police violence,” Rathod said.

Based on his experience with previous cases, Rathod believes race played a role in how Vinson was treated by police.

“Both our clients appear to have been treated with hatred and disdain in part because of the color of their skin,” he said.

Rathod said the criminal justice system treated Vinson, who faced an arrest warrant for a probation violation, more harshly than the officer accused of beating him. His bond was not set until Wednesday, requiring him to remain in jail as he waited, while Haubert was able to turn himself into authorities and be released quickly, he said.

Mari Newman, the lawyer for Elijah McClain’s father and estate, said she represented the family of a young Black man, Jamaal Bonner, who was fatally shot three times in the back by Aurora police nearly 20 years ago. The case resulted in a settlement in which police agreed to change training and recruitment tactics and to make sure their force looked “more like the community they’re policing,” she said.

“Despite these legally binding commitments that the city of Aurora made, they have gone on to continue to brutalize Black and brown bodies for decades,” Newman said.

Slevin in Denver contributed to this report. Nieberg is a corps member for the Associated Press/Report for America Statehouse News Initiative. Report for America is a nonprofit national service program that places journalists in local newsrooms to report on undercovered issues.