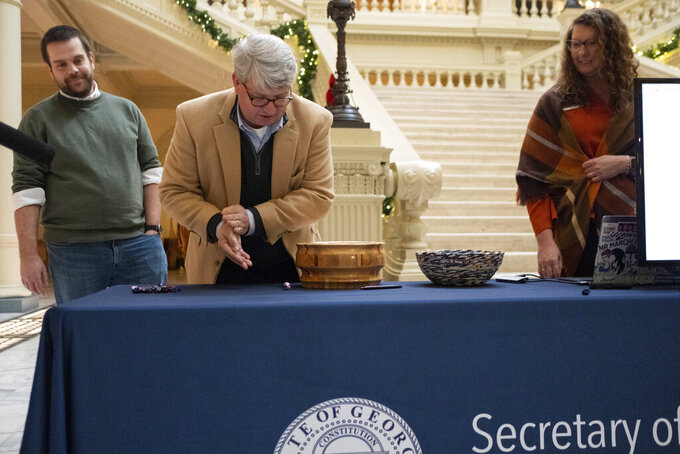 Ben Gray, ASSOCIATED PRESS
FILE -Gabriel Sterling, chief operating officer for the Georgia Secretary of State, rolls a 10-sided die as part of process to randomly determine which batches of ballots to audit for a state-wide risk limiting audit of the 2022 general election during a press conference Wednesday, Nov. 16, 2022, at the Georgia Capitol in Atlanta. A hand count of random batches of votes in Georgia's recent election for secretary of state has confirmed Republican Brad Raffensperger's victory, state election officials said, Friday, Nov. 19. (AP Photo/Ben Gray) 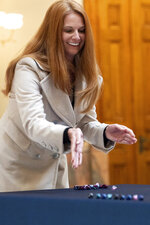 The audit — required by state law — turned up a small difference in votes from the machine count used during the election, but the difference was well within the expected margin of error, the Secretary of State's office announced Friday.

"This audit shows that our system works and that our county election officials conducted a secure, accurate election,” Raffensperger said in a statement.

The audit follows a law passed in 2019, not from any concerns about the integrity of the state’s election results. An audit is required for general elections in even-numbered years on a race selected by the secretary of state. It must be completed before the election results are certified.

Raffensperger announced earlier this month that he was choosing his race for the audit because it had the widest margin of victory, which would make the audit easier for counties to carry out. Raffensperger beat Democratic state House Rep. Bee Nguyen by more than 9 percent.

In risk-limiting audits, the smaller the margin between candidates in a race, the larger the sample of ballots that must initially be audited.

In 2020, he chose the presidential contest in Georgia between Republican Donald Trump and Democrat Joe Biden for the risk-limiting audit. Biden won that race by a narrow margin, prompting a hand tally of all votes cast to confirm the accuracy of vote-tallying scanners.

For this year's audit, Georgia election officials hosted a dice roll at the state Capitol to help determine the batches of votes that counties had to count by hand.

In total, county election officials reviewed 328 batches of ballots — a fraction of the total number of batches. More than 85 percent of those batches had no deviation from the original candidate vote totals. Of the remaining batches, all but one had a discrepancy within an expected margin of error for a hand count, the Secretary of State's office said.

Officials had said such a difference was expected because of human error during the hand counting process. Overall, Raffensperger won more than 2 million votes compared to over 1.7 million for Nguyen, according to his office.

State law requires 90% certainty that the outcome is correct, but Raffensperger said he was increasing that to 95%, that is to say a “risk limit” of 5%.