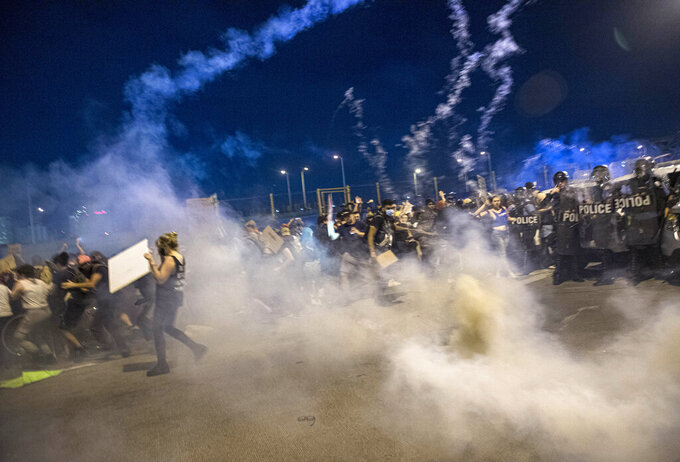 Chris Granger, ASSOCIATED PRESS
FILE - In this Wednesday, June 3, 2020, file photo, New Orleans police clash with protesters on top of the Crescent City Connection bridge days following the death of George Floyd in Minnesota. Nearly a dozen federal lawsuits alleging racist and often abusive tactics by police officers in Louisiana have been filed in the spring of 2021 as part of an initiative by the American Civil Liberties Union of Louisiana called Justice Lab. (Chris Granger/The Times-Picayune/The New Orleans Advocate via AP, File)

NEW ORLEANS (AP) — A woman forced to the ground by two sheriff’s deputies in an arrest recorded by her son. Demonstrators tear-gassed and hit by rubber projectiles while protesting the death of George Floyd. A man stunned with a Taser as he tried to flee what advocates say was an unjust arrest.

They are the subjects of federal lawsuits filed in recent weeks by attorneys working under the auspices of “Justice Lab," an initiative launched nearly a year ago by the American Civil Liberties Union of Louisiana to raise awareness of, and litigate against, police brutality and racially discriminatory policing.

“This is the first of its kind,” says Alanah Odoms, executive director of the organization. But she expects it to expand to other state ACLU affiliates, especially in the South.

It's an initiative born in the aftermath of the murder of George Floyd, a Black man who died last year after a white police officer pinned him down and kneeled on his neck until he could no longer breathe. Derek Chauvin, a former Minneapolis police officer, was convicted of murder and manslaughter charges in Floyd's death.

Law firms around the nation, regardless of specialty, are involved.

Reid Collins & Tsai LLP, for instance, describes itself on its website as a boutique law firm handling complex business litigation.

Keith Cohan, an attorney with Reid Collins in Austin, Texas, said he believes the Floyd case and discriminatory policing practices were among reasons that his firm decided to participate in Justice Lab.

“This is different than our typical practice,” he said.

Odoms said nearly 50 private law firms are involved in the project. The ACLU developed a two-week training program for the private firms involved.

The latest Justice Lab lawsuit was filed May 4 in federal court in New Orleans and accuses two St. Tammany Parish deputies of using excessive force and making a false arrest in what started out as a May 5, 2020, traffic investigation. Reid Collins attorneys are among those representing Teliah Perkins in the suit. It references a video recorded by her 14-year-old son and posted on YouTube that shows police forcing her to the ground, her face to the pavement in front of her Slidell home. The suit says the incident began when officers stopped to question her about complaints of someone in the area riding a motorcycle without a helmet.

Capt. Scott Lee, a spokesman for the Sheriff's Office, said the department doesn't comment on pending litigation but also said complaints about the arrest “were full investigated and deemed to be unfounded.”

Another high-profile lawsuit says police in New Orleans unlawfully used a Taser last year on Michael Celestine, a Black man, as he ran from officers and tried to climb a fence. The lawsuit acknowledges police later found a small amount of cocaine and a gun on Celestine. But it also says officers never had a reason to approach Celestine. It notes that charges eventually were dropped and says the use of force and the search were unlawful.

In a response filed last week, the police officers say Celestine “attempted to evade a lawful investigatory stop." They deny wrongdoing and also claim they state law grants them “qualified immunity” for lawsuits over actions they take in the course of their work.

Qualified immunity for police is a concept supported by many in laws enforcement as necessary to protect police from unjust lawsuits. But it's being challenged by criminal justice advocates around the country in the aftermath of the Floyd case. And it's a target of the Justice Lab litigation.

“We have a real chance, I think, to build a body of case law that at least stands to challenge qualified immunity,” Odoms said.