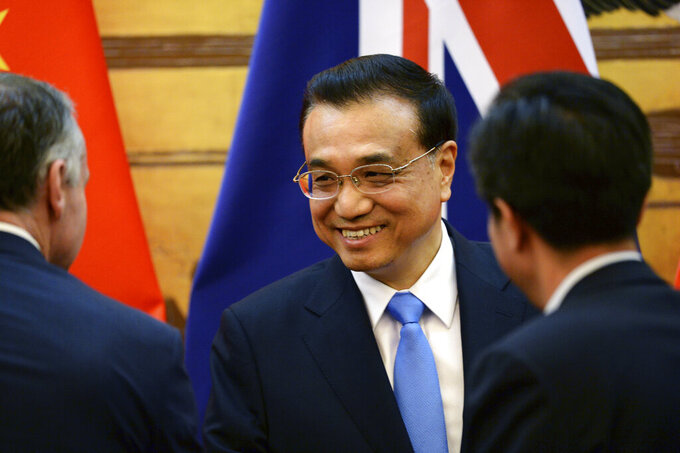 Parker Song, ASSOCIATED PRESS
FILE - Chinese Premier Li Keqiang attends a signing ceremony with Australian Prime Minister Malcolm Turnbull at the Great Hall of the People in Beijing, China, on April 14, 2016. Li wrote to congratulate Australian Prime Minister Anthony Albanese on his election victory, which some Australian media reported on Tuesday, May 24, 2022, was a thawing of bilateral relations that Beijing put into deep freeze more than two years ago. (Parker Song/Pool Photo via AP, File)

CANBERRA, Australia (AP) — Chinese Premier Li Keqiang wrote to congratulate Australian Prime Minister Anthony Albanese on his election victory, which some Australian media reported on Tuesday was a thawing of bilateral relations that Beijing put into deep freeze more than two years ago.

Albanese and Foreign Minister Penny Wong were sworn in Monday, then immediately flew to Tokyo for a summit with U.S., Japanese and Indian leaders after Australia’s center-left Labor Party narrowly won an election Saturday.

Li told Albanese: “The sound and stable development of the Sino-Australian relationship conforms to the fundamental interests and common aspirations of the two peoples and is also conducive to peace, stability, development and prosperity in the Asia-Pacific region,” China Daily reported.

“China stands ready to work with Australia to learn from the past, look to the future and push forward the sound and stable development of a bilateral comprehensive strategic partnership by adhering to the principles of mutual respect and win-win results,” Li added.

Abanese confirmed that he had received a “letter of congratulation” from Li and other world leaders.

“I welcome that,” Albanese said in Tokyo. “We will respond appropriately in time.” Albanese has said he expected bilateral relations to remain difficult despite Australia’s government change.

Labor described the recently announced security pact between China and the Solomon Islands as Australia’s worst foreign policy failure in the Pacific since World War II. China's Foreign Minister Wang Yi will visit the Solomon Islands on Thursday and Friday to mark the new cooperation, the Solomons' government said Tuesday.

Morrison argued that China wanted Labor to win because a Labor administration would be less likely to stand up to Beijing’s economic coercion.

Albanese told his Quad partners on Tuesday that while Australia’s government had changed, the nation’s commitment to their security alliance had not.

Asked whether Sino-Australian relations were thawing from their “deep freeze,” Treasurer Jim Chalmers told Australian Broadcasting Corp. on Tuesday: “We want to work with countries in our region to make sure it is stable and prosperous.”

Although the two countries are free trade partners, China has created a series of official and unofficial trade barriers to a range of Australian exports worth billions of dollars.

After conservative lawmakers replaced Turnbull with Morrison as prime minister in 2018, Premier Li had credited Morrison’s “positive attitude” with helping to restore relations that Turnbull had put in the diplomatic freezer.

“It’s now up to Penny Wong and Anthony Albanese on their return to Australia to capitalize on that and explore opportunities for opening up the freezer door,” Blaxland said.

Because the bilateral relationship had deteriorated since Labor was last in office in 2013, China could be expected to give the new administration the benefit of the doubt.

“This is a key inflection point. We know that substantively, policy differences are hard to discern, but in this kind of domain, words matter and … a shift in tone is … really consequential,” Blaxland said.

A Chinese expert said he expects Labor to be less confrontational toward China, though he doesn't foresee any immediate shift in Australia’s position.

“We don’t expect to see a rapid change in the Australian government’s tough stance against China because the Labor Party believes the ideological differences between China and Australia are huge,” said Su Hao, an international relations professor at the China Foreign Affairs University in Beijing.

“But at least bilateral relations should not deteriorate through more provocations that lead to new problems. Therefore, the sending of a congratulatory message by Li Keqiang is a kind of gesture, indicating China’s hope that China-Australia relations could remain relatively stable,” Su added.