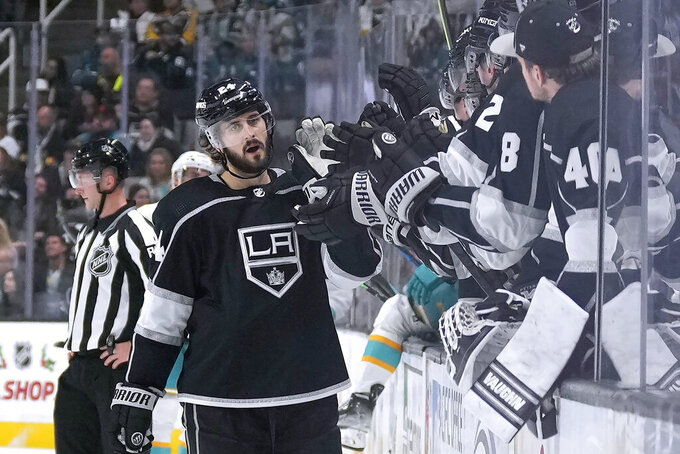 SAN JOSE, Calif. (AP) — Jaret Anderson-Dolan had a goal and an assist for his first two points of the season and the Los Angeles Kings beat the San Jose Sharks 5-2 on Friday night.

“I think we’re all just working, doing the little things right and it was paying off,” Anderson-Dolan said. "It turned into opportunities and we capitalized on a couple of those tonight.”

“It’s unfortunate that my performance wasn’t up to par tonight,” Reimer said.

Anderson-Dolan scored his first goal of the season midway through the first period with a shot that beat Reimer to the glove side.

“Feels great. It’s been a while so it definitely felt good,” Anderson-Dolan said.

Anderson-Dolan also assisted on Kupari's goal early in the third.

“I thought our first period got better as it went on, and then they got the power play," Sharks coach David Quinn said. "And you know, listen, that’s a good team. They’re hard. They’re quick. At times we matched them and at times we didn’t.”

“I couldn’t be happier for that group. That line played their best game of the season together. They were firm, they were hard, and they won a lot of puck battles," McLellan said.

Reimer returned to the lineup after a one-game absence.

Sharks defenseman Radim Simek was activated off IR and played his first game since Nov. 13.