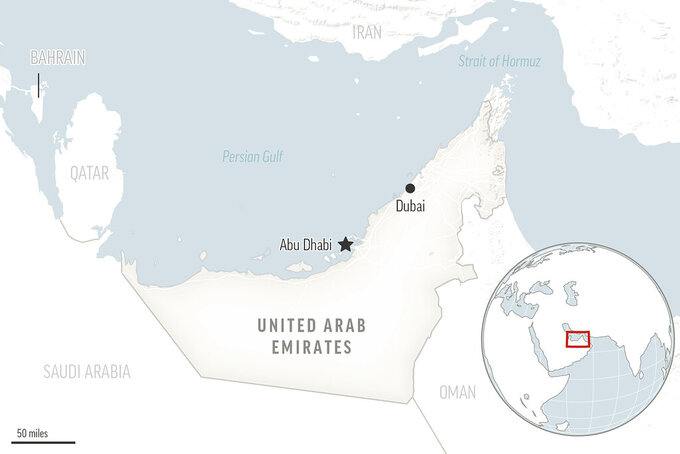 Uncredited, ASSOCIATED PRESS
This is a locator map for United Arab Emirates with its capital, Abu Dhabi. (AP Photo)

Paul Griffiths, who oversees the world’s busiest airport, told The Associated Press the annual forecast at Dubai International, or DXB, is more than 64 million. The airport saw 18.5 million passengers in the third quarter of this year, up from 17.8 million during the first quarter of 2020 — prior to and at the dawn of the pandemic.

Most of the growth, Griffith said, comes from the traditional markets of India, the U.K., Saudi Arabia and Pakistan. He added that the end of COVID-19 testing requirements and people’s eagerness to travel have contributed to the increase.

“Recovery is very much on the agenda and has been a phenomenon here ever since the end of the pandemic,” Griffiths said.

The new numbers are welcome news for the tourism-driven economy of Dubai, which accounts for about 12% of the tiny nation's GDP. A year ago in the third quarter, 6.7 million came through the airport.

Still the figure is nowhere near the pre-pandemic milestone of 86.4 million in annual traffic logged by the airport in 2019.

The largest share of traffic to Dubai came from India, with 6.8 million travelers, followed by Saudi Arabia, with 3.4 million travelers this year. A key growth market for travel to and from Dubai is Pakistan and the United States.

The United Arab Emirates is home to more than 100,000 British citizens. Dubai’s main airport logged 3.2 million passengers from the U.K. up to September this year, making it the third largest share of traffic numbers.

Around 60% of Dubai’s airport traveler figures this year represent arrivals, with the rest transiting through.

The first World Cup in the Middle East, currently taking place in Qatar, says Griffiths, is expected to add 494,000 passengers to Al Maktoum International Airport, or DWC, during the fourth quarter of the year. Currently, 120 daily flights are operational from DWC for FIFA fans to shuttle between matches in Doha and Dubai.

Qatar Airways has 60 daily flights to shuttle soccer fans to the tournament, while the other 60 are operated by low-cost carrier FlyDubai, he said.

Ambitious plans to turn the airfield in Dubai’s southern desert into a mega-aviation hub, first unveiled by Dubai before the 2008 global financial crisis, have sputtered in recent years. Long-haul carrier Emirates, based in Dubai, parked many of its double-decker Airbus A380s there during the pandemic as commercial flights halted.

Now, Griffiths says the air travel market continues to rebound around the world, with more people traveling as mobility returns to the world.

The widespread lifting of pandemic restrictions in Dubai triggered a rapid increase in air travel demand, filling Dubai’s hub. Griffiths says that has also contributed positively to the city’s economy.