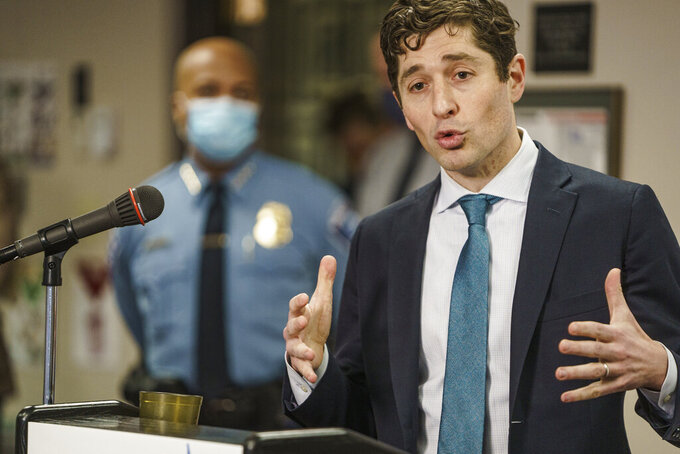 Richard Tsong-Taatarii, ASSOCIATED PRESS
FILE - In this Feb. 17, 2021 file photo, Minneapolis Mayor Jacob Frey addresses the media in Minneapolis. A judge struck down ballot language Tuesday, Sept. 7, 2021, that would replace the Minneapolis Police Department with a new agency, saying the wording was misleading and unworkable. Mayor Frey, who had opposed the rejected wording, said the council now has another opportunity to deliver language that accurately and fairly reflects the proposal. (Richard Tsong-Taatarii/Star Tribune via AP, Pool File)

MINNEAPOLIS (AP) — A judge struck down ballot language Tuesday that aimed to replace the Minneapolis Police Department with a new agency, which sent the City Council scrambling to approve new language that members hope will stand up.

“The court finds that the current ballot language is vague, ambiguous and incapable of implementation, and is insufficient to identify the amendment clearly," Hennepin County District Judge Jamie Anderson wrote. "It is unreasonable and misleading.”

Anderson issued the order just hours ahead of a 5 p.m. Tuesday deadline for ballots to go to the printer. The City Council approved the new language 12-1 a few hours later. Mayor Jacob Frey, who had twice vetoed earlier language, said it was now they city's legal obligation to put the revised version on the ballot, but that he'll vote against it in the election. He said he believes it’s possible to make significant, needed improvements to policing without amending the city charter.

The rejected language for the proposed amendment to the city charter, approved by the City Council last month, would have asked voters whether to replace the police force with a new but mostly undefined Department of Public Safety that “could include” police officers. It would have removed a mandate that the city have a police department and provide at least minimum staffing levels based on population. The council instead of the mayor would control the new entity.

The new language, presented by City Attorney Jim Rowader, asks voters whether to remove the police department requirement from the charter and replace it with a Department of Public Safety, whose specific functions would be determined by the mayor and City Council by ordinance. It includes an explanatory note that would appear on the ballot to provide voters with more information on how the change would be implemented, saying the new department would be led by a commissioner nominated by the mayor and appointed by the council, and that the current minimum funding requirement would be eliminated.

Rowader told the council that the new language was meant to address the judge's concerns. But he said they had no assurances from her about what would happen if there were further challenges.

“We certainly think that we've done our absolute best to satisfy all of the concerns she has stated,” Rowader said.

The proposal had its roots in the “defund the police” movement that gained steam after last summer's police killing of George Floyd in Minneapolis. Supporters said the ballot question would not abolish policing in Minneapolis, just remove charter requirements that they argued blocked moves toward more police accountability and racial justice. But critics, including Frey, said it left out crucial details of how policing in the city would look going forward.

Council President Lisa Bender noted that the proposal arose from a citizens' petition campaign and told her colleagues that it was their “ministerial duty to do everything we can to approve language for the ballot this November.”

Frey told reporters the proposal's supporters tried to “hide the ball” from the voters with the earlier, vague language. While the mayor is allowing the new language to go on the ballot, he said he still opposes the substance of the proposal.

“It eliminates the police department and creates a department of public safety," Frey said. "It gets rid of the position of the chief of police. It gets rid of the requirement to fund a minimum number of police officers. And it changes the reporting structure so that the head of that department would report to 14 different people — 13 council members and the mayor.”

The injunction to keep the language off the ballot was sought by former City Council Member Don Samuels, his wife, Sondra, and businessman Bruce Dachis. Their attorney, Joseph Anthony, called Anderson's ruling a “courageous and correct decision.” Anthony said he was planning to consult with his clients about whether the revision was acceptable to them.

The proposal has caused concerns among some centrist Democratic leaders that it could harm the party not just locally but nationwide, as Republicans use fears over public safety to try to woo back suburban swing voters. U.S. Rep. Angie Craig, U.S. Sen. Amy Klobuchar and Gov Tim Walz spoke out against the measure last month, while two prominent progressives, U.S. Rep. Ilhan Omar and state Attorney General Keith Ellison, endorsed it last week.