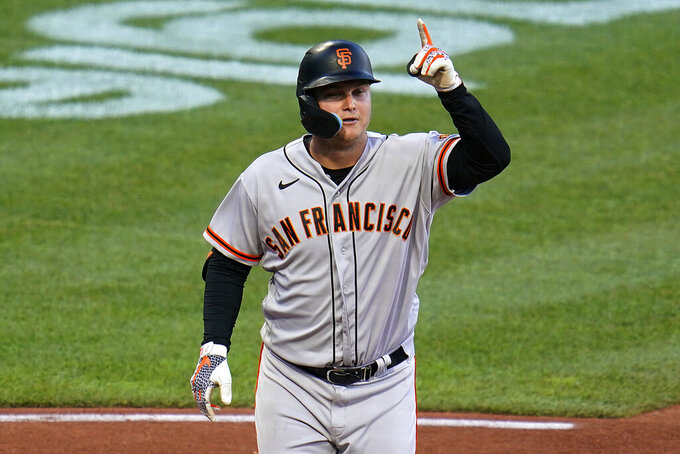 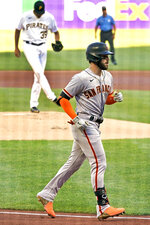 PITTSBURGH (AP) — Carlos Rodón walked off the mound and into the San Francisco Giants dugout after eight nearly spotless innings against the Pittsburgh Pirates on Friday night prepared for a conversation about whether he'd get a chance at walking back onto the field for the ninth.

Earlier in his career, Rodón admits he might have dug in his heels and pleaded his case. Those days are over, the byproduct of wisdom gleaned from too many trips to the operating room.

So when San Francisco manager Gabe Kapler turned to closer Camilo Doval to get the final three outs, Rodón nodded his head and then watched the flamethrowing 24-year-old finish out a 2-0 victory that handed the surging Giants their sixth win in seven games.

Would Rodón have liked a shot at picking up his first shutout since April 2021? Of course. But there's another start against World Series champion Atlanta looming next week, then hopefully another 15 or more after that. It's a long season. Rodón is rolling. His team is, too. So why push it?

“My younger self would have been, ‘I want to go back out,’” Rodón (6-4) said after limiting the Pirates to two hits. “But (the season) is a marathon. I'm throwing again in five days. I want to be ready for five days from now when I have to face Atlanta.”

Rodón certainly looks ready after breezing through a Pittsburgh lineup that ranks near the bottom in the National League in nearly every offensive category. Rodón needed just 98 pitches to get 24 outs. He needed the same total to get through just four innings in a loss to Philadelphia on June 7 and six innings in a victory over the Los Angeles Dodgers last Sunday.

“As crazy as it sounds, for him to be striking everybody out and running really deep counts and a ton of foul balls, it's going to be more difficult for him to get through eight innings like he did today,” Kapler said.

Rodón struck out eight against two walks while lowering his ERA to 2.84 as the Giants sent the Pirates to their 10th loss in 11 games. Doval's perfect ninth gave him 10 saves on the season.

Luis González took the game's third pitch from Zach Thompson (3-5) and sent it over the right-field seats for his third home run. Joc Pederson hit his 14th homer leading off the fourth for the Giants, who have won 12 of 18.

Rodón held the Pirates without a hit until rookie Jack Suwinski singled with two outs in the fifth. Ke'Bryan Hayes added another single in the sixth, but Pittsburgh's offense did little else.

Thompson struggled with his command, issuing a career-high five walks while losing for the first time in almost a month. When Thompson found the strike zone, González and Pederson turned on a pair of mistakes and sent the ball soaring over the 21-foot high Clemente Wall in right field.

Only four double plays — one in each of the first four innings — kept the Pirates in the game before Thompson exited after walking Austin Wynns with one out in the fifth.

“I was all over the place,” Thompson said. “Really relied on my defense today. I’m thankful (Hayes) made that great play at third and (Michael) Chavis with the double play at first. They did a really good job behind me. I just gotta kind flush this one and move forward.”

Rookie reliever Cam Vieaux — the 10th Pittsburgh player to make his major-league debut this season — kept the Giants in check after taking over for Thompson, but by then Rodón was on cruise control.

Giants: LHP Matthew Boyd has been shut down for several weeks due to a strained flexor tendon in his left forearm. San Francisco had hoped Boyd, who underwent surgery on the tendon last fall, would be back by late July. Kapler said the team is still optimistic Boyd will be able to return this season. ... RHP Anthony DeSclafani (right ankle) allowed four runs (three earned) in 2 2/3 innings in a rehab appearance with Triple-A Sacramento on Thursday. DeSclafani could rejoin the Giants next week when they are in Atlanta. He is eligible to come off the injured list next Tuesday.

Pirates: Placed rookie OF Canaan Smith-Njigba on the 60-day injured list after he fractured his right wrist during a collision with center fielder Bryan Reynolds in a win over St. Louis on Wednesday. ... 1B Yoshi Tsutsugo (strained back) is scheduled to begin baseball activities in the near future and could head out on a rehab assignment sometime within the next week. ... 2B Tucupita Maracano was placed on the COVID-19 list shortly before first pitch. Pittsburgh called up SS Liover Peguero to take Maracano's spot.