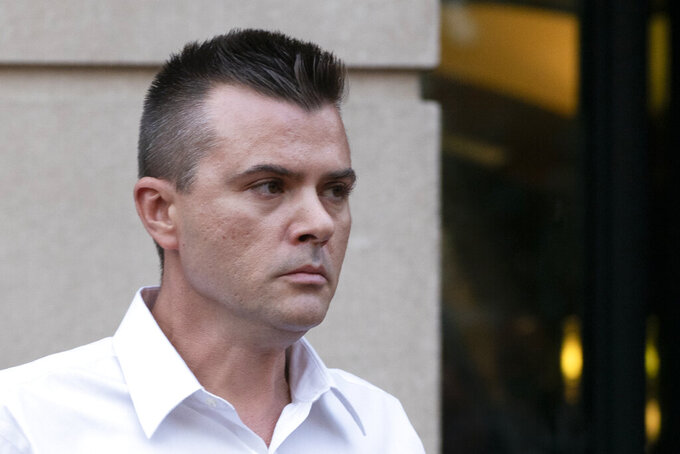 Manuel Balce Ceneta, ASSOCIATED PRESS
Igor Danchenko leaves Albert V. Bryan United States Courthouse in Alexandria, Va., Thursday, Nov. 4, 2021. Danchenko, a Russian analyst who contributed to a dossier of Democratic-funded research into ties between Russia and Donald Trump, was arrested Thursday on charges of lying to the FBI about his sources of information, among them an associate of Hillary Clinton. (AP Photo/Manuel Balce Ceneta)

ALEXANDRIA, Va. (AP) — A Russian national who served as a primary source for a dossier of negative research about former President Donald Trump pleaded not guilty Wednesday to charges that he lied to the FBI about the legitimacy of his own sources.

A judge set an April trial date for Igor Danchenko, a former analyst at the Brookings Institution whose lawyer says he's being maligned in a deliberately false narrative by people with an agenda.

The indictment, brought by Special Counsel John Durham, accuses Danchenko of making false statements to the FBI about how he obtained information that went into the “Steele dossier,” a report compiled by former British spy Christopher Steele and financed by Democrats that included salacious allegations about Trump's conduct in Russia and allegations about ties between the Trump campaign and Russia.

According to the indictment, the FBI invested significant resources attempting to corroborate the dossier and relied substantially on it to obtain surveillance warrants warrants targeting former Trump campaign aide Carter Page.

Trump has railed against the dossier for years, saying it was full of lies and part of a Democratic smear campaign.

According to the indictment, Danchenko received information from a Democratic donor and activist named Charles Dolan Jr. that was included in the dossier. Dolan is not identified by name in the indictment, but his lawyer has confirmed that Dolan, a former executive director of the Democratic Governors Association who advised Hillary Clinton’s 2008 presidential campaign and volunteered for her 2016 campaign, is the individual referenced in the indictment.

The indictment says Danchenko lied to the FBI and denied that he'd ever discussed the allegations with Dolan. If the FBI had known the allegations came from a Democratic operative who had motive to make Trump look bad, the bureau might have assessed the dossier's credibility differently, according to the indictment.

Danchenko's lawyer, Mark Schamel, said in a statement that the 39-page indictment “presents a false narrative designed to humiliate and slander a renowned expert in business intelligence.”

“Mr. Danchenko is a respected research analyst who uncovered and exposed Vladimir Putin’s plagiarized Ph.D. thesis and whose work has been recognized all over the world for its intellectual rigor and accuracy,” Schamel said. “For the past five years, those with an agenda have sought to expose Mr. Danchenko’s identity and tarnish his reputation. ... We will expose how Mr. Danchenko has been unfairly maligned by these false allegations."