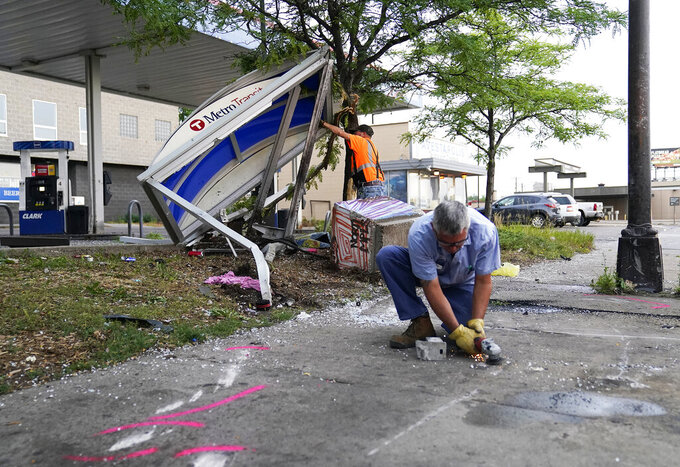 MINNEAPOLIS (AP) — Minneapolis Mayor Jacob Frey said Thursday the city will review its police pursuit policy after a chase that ended with an officer hitting and killing an innocent motorist.

Frey called the crash that killed 40-year-old Leneal Frazier early Tuesday “a horrific tragedy.” Frazier was an uncle of Darnella Frazier, the teenager who captured cellphone video of George Floyd's death in May 2020 as he was being arrested by Minneapolis police.

“Darnella, Leneal’s family and Minneapolis’ Black community have borne the weight of more trauma over the last year than anyone, let alone any young person, should be expected to endure in a lifetime," Frey said in a statement.

Frey said the pursuit policy would be evaluated even as the State Patrol and the department investigate the crash.

Darnella Frazier said in a Facebook post that Leneal Lamont Frazier died early Tuesday after his vehicle was struck by the squad car that police said was pursuing another driver linked to several robberies. Frazier was not involved in the pursuit and his niece questioned why police were conducting a high-speed chase on a residential road.

According to police, the squad car and two other vehicles collided about 12:30 a.m. after the suspect fled from a traffic stop. Leneal Frazier was taken to North Memorial Health, where he later died.

The Star Tribune reports that Minneapolis police updated their pursuit policy in 2019 after pursuits rose sharply over three years. It says police may not initiate a pursuit and must break off a pursuit if it “poses an unreasonable risk to the officers, the public or passengers of the vehicle being pursued who may be unwilling participants.”

The policy reads that officers can only give chase in situations in which they believe a suspect has committed or is about to commit “a serious and violent felony or gross misdemeanor.”

The policy also allows for a pursuit if the suspect’s driving is “so flagrantly reckless that the driver would pose an imminent and life-threatening danger to the public if not apprehended.”

Darnell Frazier was 17 when she recorded the arrest of Floyd, a 46-year-old Black man, on May 25, 2020. Former Minneapolis police Officer Derek Chauvin, who held his knee to Floyd's neck as Floyd was handcuffed and face down on the street, was convicted and sentenced to 22 1/2 years in prison. The three other former officers who were at the scene are due to stand trial in March. All four also face federal civil rights charges.

She was given a special citation by the Pulitzer Prizes last month for her recording.