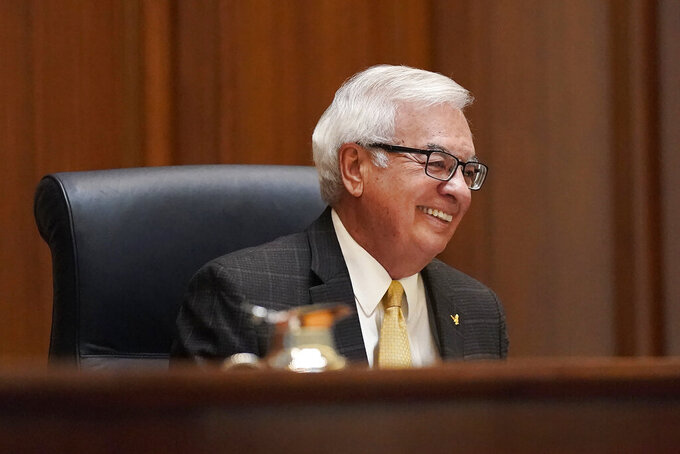 The moves mark the last dominos to fall after Chief Justice Tani Cantil-Sakauye announced in July that she will step down in January.

That gave Gov. Gavin Newsom his third opportunity to appoint a justice to the seven-member high court.

Newsom, a Democrat who was handily reelected Tuesday, first elevated Guerrero to lead the nation’s largest judicial system, just months after he had appointed her to the state Supreme Court.

The same day he announced he would appoint Evans to take her place.

Evans was approved Thursday by the Commission on Judicial Appointments, consisting of Cantil-Sakauye, state Attorney General Rob Bonta and Judge Manuel Ramirez, the senior presiding justice of the state Court of Appeal.

Evans, who was accompanied by many members of her family and friends, dedicated the day to her grandmother who raised her and who she credited for becoming a lawyer, a judge and now a justice.

“I believe that my grandmother would have understood, as I do, that the law it’s so much more than an esoteric ivory tower exercise. At its core, what is the law about? It’s about real people and real communities,” she said.

The Commission on Judicial Nominees Evaluation rated Evans “well qualified," a rare step lower than its top rating of “exceptionally well qualified.” The State Bar's commission did not explain its lower ranking but still concluded that Evans “will make an outstanding Associate Justice.”

Evans has been an Alameda County Superior Court judge just since last year. She previously was Newsom's chief deputy legal affairs secretary, where his office said she helped him shape a moratorium on capital punishment that Newsom issued in 2019.

She previously was a special assistant to the state attorney general from 2017 to 2019 and a senior trial attorney in the U.S. Department of Justice's civil rights division from 1998 to 2001. She had positions with the California State Bar from 2014 to 2017 and with the ACLU of Northern California from 1995 to 1998 and again from 2010 to 2013. She also was a member of federal court-appointed monitoring teams for the Oakland and Cleveland police departments.

Unlike U.S. Supreme Court justices and federal judges, California judges do not hold lifetime positions. Justices go before voters, but face no opposition, in the first gubernatorial election after their appointment, and again if they fill an unexpired 12-year term for a previous justice. Three associate justices on the state's high court were retained in this election:

— Justice Martin Jenkins, the first openly gay Black man on the state’s high court. He was appointed by Gov. Gavin Newsom in 2020.

— Justice Joshua Groban, who was appointed in 2019 by then-Gov. Jerry Brown.

— Justice Goodwin Liu, who was appointed by Brown in 2011.