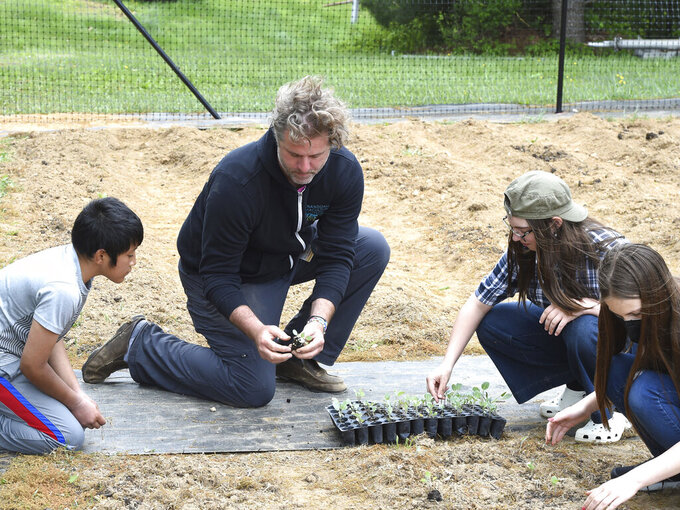 STAUNTON, Va. (AP) — Reggie Walton will be moving next year and not attending Shelburne Middle School. The seventh-grader is disappointed that they won’t see the end results of the work put into creating a school garden this year, but excited to be part of a legacy that will hopefully live on for many years.

Last spring Shelburne’s CTE teacher Ryan Blosser stood in a grassy area behind the middle school and next to the track talking about his dream to create a garden and learning lab that can be used by all students at the school. Behind-the-scenes work was already well underway in realizing that dream.

With funding supplied by the Community Foundation of the Central Blue Ridge and Staunton City Schools, plus a lot of hard work by Blosser and his students, a year later that dream has come true. On May 12, students were planting kale and collard greens in the production garden.

Blosser is quick to point out the actual work, the putting hands in dirt, was done not by him, but by his students.

“I haven’t touched anything,” Blosser said. “I’ve barked orders. This is all student work from designing the garden to installing landscape fabric to installing deer fence.”

The garden even has a name, Shelbloom Community Garden. Shelburne student Jocelyn Tucker’s garden design using CAD software was the one the school chose to use, 25-foot beds for planting with a quadrant for raised beds that will be more of an experimental lab.

Seventh-graders Hudson Bronik-Ezzell and Walton said digging the holes and putting in stakes for the deer fence may have been the most difficult part. Bronik-Ezzell also said the students had to relocate a volleyball net because volleyballs kept ending up in the garden and that wasn’t ideal, especially once plants were in the ground.

Seventh-grader Nate Colavita said he hasn’t worked in gardens before but he was enjoying the experience this spring.

In addition to the kale and collard greens, Blosser said there would be potatoes, sweet potatoes, bush beans, tomatoes and some peppers planted this spring. A bulk of the harvest should happen once students return for the next school year. Blosser is still working on a plan on how to distribute the food.

“I want that to be one of those good problems,” Blosser said. “I want this garden to be super productive, and in August, September, October, we need to get rid of this food. Where? That’s my hope.”

He said the garden is not for producing income. The food is for the Staunton City Schools community. Income comes from the greenhouse. Shelburne held a plant sale from their greenhouse on Friday at the school.

Blosser will maintain the garden over the summer, although he won’t be surprised if some students show up from time to time to help.

“I’m beaming,” Blosser said. “I’m so proud. I keep telling them this is a legacy project. They’ve installed something that is not a small deal that will continue throughout.”