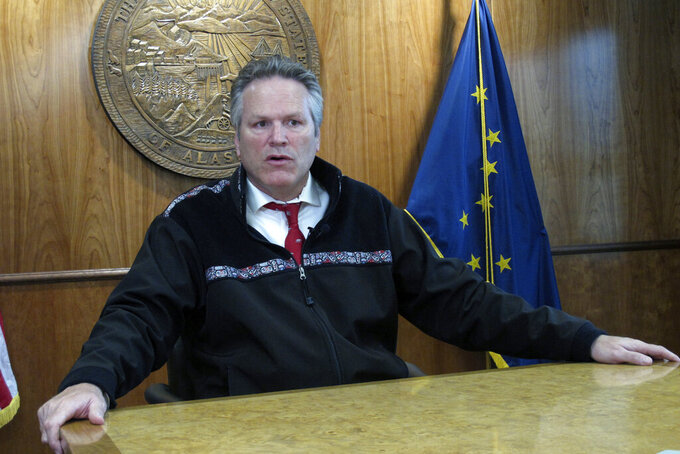 Dunleavy’s spokesperson Patty Sullivan initially told The Associated Press that Dunleavy turned power over to Lt. Gov. Kevin Meyer during the procedure. Later, she clarified in an email that the process is automatic as outlined in the state constitution, which provides and ensures the lieutenant governor acts in the governor's stead when necessary.

“Although the Lt. Governor did not take on necessary duties, for a short time, he still had the authority to do so if it were needed,” she wrote. “There’s no specific delegation document. The Constitution is the delegation tool as it anticipates this transfer of authority.”

The governor’s office said the wear and tear on his shoulder came from a lifetime of sports and physical activity. The statement said the governor indicated repair was long overdue.

In a separate email, Sullivan called it a “routine, non-emergency procedure on his shoulder” when asked to further detail the nature of the injury and whether the governor was under anesthesia for the surgery.

Dunleavy, a Republican, planned to work from home in the Matanuska-Susitna Borough this week as he recovers, the statement said. Sullivan added the home recuperation is at the advice of his physician.

In August 2019, Dunleavy’s office announced that biopsies of skin variations removed from his head confirmed a basal cell carcinoma, or a mild form of skin cancer. He underwent a procedure to remove the carcinoma.

Dunleavy temporarily suspended his gubernatorial campaign in 2017 for medical issues involving his heart. In reviving his campaign, Dunleavy said his treatments were successful.

In November 2016, then-Gov. Bill Walker announced he had a treatable form of prostate cancer and planned to undergo surgery a month later outside Alaska. However, he did not name the state or hospital where the surgery was held.