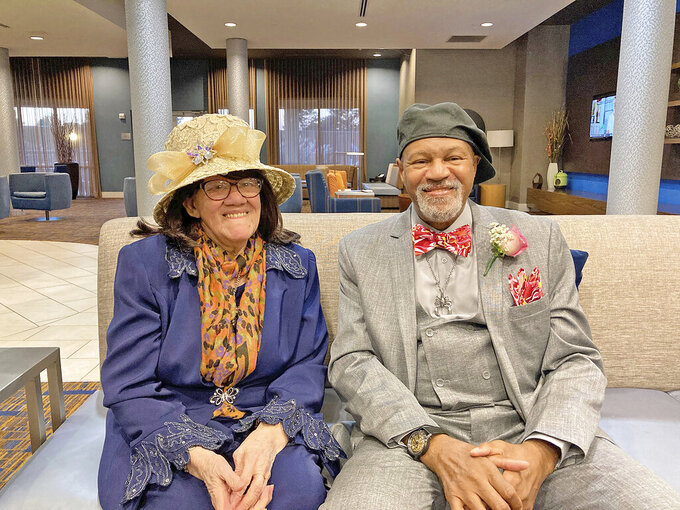 Nicole Bowman-Layton, ASSOCIATED PRESS
Susie Hood and her brother, Roland Irions Sr., pose on Saturday, Oct. 23, 2021, at the Courtyard Marriott in Columbus, Miss., before a meet and greet. Irions wanted to meet his 90-year-old sister for the first time for his 70th birthday. (Nicole Bowman-Layton/The Commercial Dispatch via AP)

COLUMBUS, Miss. (AP) — A 70-year-old Chicago man traveled to Mississippi to meet his 90-year-old sister in person for the first time, and their extended group of relatives found an easy sense of connection.

Roland Irions Sr. and Susie M. Hood gathered with other relatives Saturday in Hood's hometown of Columbus, Mississippi, the Commercial Dispatch reported. The family arranged a gathering at a hotel, with videos showing family photos.

Hood said she and Irions have the same father, Johnnie Irions, who married twice. Each is the only surviving member of their own sibling group.

Irions said when Hood walked into the hotel, he knew exactly who she was.

“I said that there is no way that you could be anybody else, but my sister, because she looks just like our father,” he said.

Irions and Hood first contacted each other about seven years ago. After one of their brothers died last year, Irions wanted to meet his sister in person for his 70th birthday. The families started making arrangements.

“We have the same father, and it was time for us to come together and break that gap," Irions said.

Hood is the wife of the late Rev. General L. Hood. She said she had 17 children, 25 grandchildren and 31 great-grandchildren.

About 40 people traveled to Columbus from both Hood and Irions’ families for the meet-and-greet, with some cousins coming from Washington, said Marie Lewis, one of Hood’s children who helped organize the event.

While some arrived the day before the celebration, others arrived Saturday. Hood and Irions said that on Friday night, family members filled the hotel lobby with conversation and laughter.

“I was worried the hotel was going to kick us out. We had this place lit on Friday night,” Irions said while laughing with Hood.

“That’s what’s so amazing,” he said of the gathering. “None of us had laid eyes on each other in real life, but the conversation just started flowing. We just guessed it was the genes that we have and the bond of love. Nobody — in fact it was a little strange — nobody was shy.”

Hood is the second-oldest in her sibling group, and Irions is second-youngest in his.