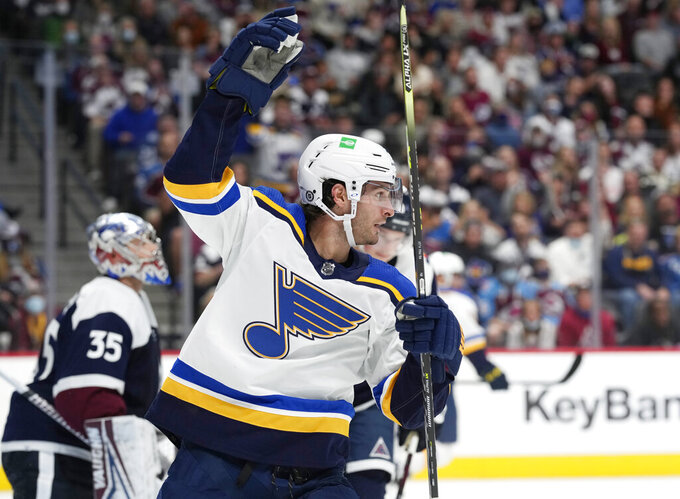 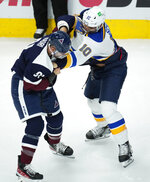 DENVER (AP) — David Perron’s teammates gave him a hard time for sitting out Friday’s practice. The extra rest seems to have paid off for the St. Louis Blues.

“I’ve never taken so much heat for taking the time I needed to play today,” Perron said. “I had to score one at least.”

Perron scored twice, including the eventual winner, Jordan Binnington stopped 29 shots and St. Louis held on for a 5-3 win over the Colorado Avalanche in its opener on Saturday night.

Justin Faulk had a goal and an assist, while Brayden Schenn also scored for the Blues.

Perron was in street clothes while his team was on the ice in Vail, Colorado, on Friday, and his status was uncertain close to game time. After taking part in pregame warmups, the 33-year-old veteran felt good enough to go.

“Yeah, I was a little concerned. That’s why I took the practice off,” Perron said. “I wasn’t sure after the morning skate, either.”

Colorado center Nathan MacKinnon, who tested positive for COVID-19 on Tuesday, was out for the second straight game, but coach Jared Bednar returned to the bench after missing Wednesday’s game due to COVID-19 protocols.

Captain Gabriel Landeskog served the first of his two-game suspension for a boarding call on Wednesday, leaving the Avalanche without two members of their top line.

“There’s so many balls in the air now as far as who’s in, who’s out, who can test negative and get back in our lineup,” Bednar said.

Colorado trailed 4-1 when Tyson Jost scored at 14:36 of the third and J.T. Compher made it a one-goal game at 16:18. The Avalanche appeared to tie it with 2:49 left but a replay review determined it was scored with a kicking motion.

“It looks like a pretty conclusive kicking motion. It’s a little bit of a tough one, the guy is falling into him,” Colorado defenseman Cale Makar said. “Tough one, but we definitely had a good effort at the end.”

Ryan O’Reilly sealed it with an empty-net goal with 20 seconds remaining.

“It’s 4-on-4, they pull their goalie and they kind of put us on our heels a little bit,” St. Louis coach Craig Berube said.

Faulk scored just 4:12 into the game and Schenn added to the Avalanche’s misery when he beat Darcy Kuemper to the short side to put the Blues ahead by two goals at 8:35 of the second.

Perron made it 3-0 when he scored at 11:37 of the second. Colorado got one back when Andre Burakovsky scored at 14:09, but Perron answered early in the third on a power play to restore the three-goal lead.

Colorado honored the late Pierre Lacroix, who was the general manager during the team’s two Stanley Cup seasons, before the game. Lacroix died Dec. 13, 2020, at age 72 after contracting COVID-19.

His wife, Coco, children and grandchildren were in attendance and a video tribute commemorating his career with the Quebec Nordiques and Avalanche was shown on the scoreboard.

A painting of Lacroix holding the Stanley Cup after the 1996 finals was unveiled and general manager Joe Sakic spoke. Sakic, along with former Colorado players Peter Forsberg, Ray Bourque, Milan Hejduk and Adam Foote, helped raise a banner honoring Lacroix to the rafters.

Just 40 seconds into the game Schenn fought Colorado’s Nazem Kadri in response to Kadri’s hit on Falk in Game 2 of their first round playoff series in May. Kadri was given an eight-game suspension for the hit to the head and then had to answer to the Blues.

Schenn said he told Kadri they were going to drop the gloves as they stepped on the ice for the start of the game.

Schenn was lauded by his teammates for sticking up for Faulk.

“These guys care about each other, they’re a pretty close team, so they take care of that stuff themselves,” Berube said. “It was great to see.”

Colorado: At Washington on Tuesday to start a three-game road trip.