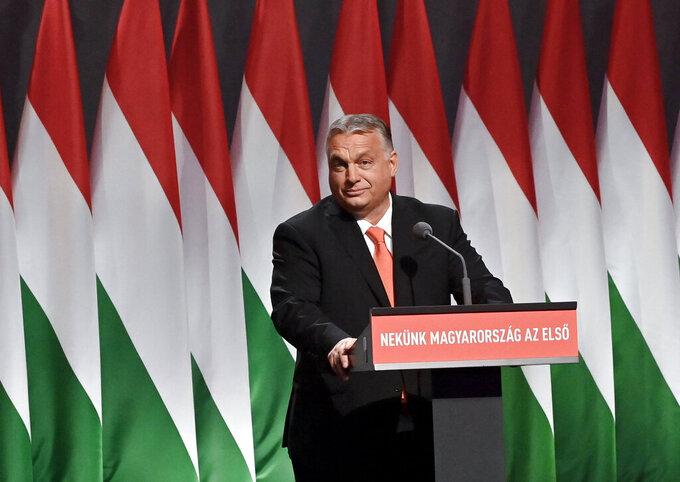 Hungary erected a razor-wire barrier on its border with Serbia and Croatia in 2015 as well over 1 million people, most fleeing conflict in Syria, entered the EU, often from Turkey via Greece. Tens of thousands moved north, deeper into the EU, in search of sanctuary and better lives.

As more people arrived, Orban began to accuse Hungarian-born U.S. billionaire George Soros and groups linked to him of encouraging the migrants. In 2018, Hungary's government introduced legislation known as the “Stop Soros” laws that would make it an offense to help people apply for asylum.

The European Court of Justice said Hungary had failed to fulfill its EU obligations “by criminalizing, in its national law, the actions of any person who, in connection with an organizing activity, provides assistance in respect of the making or lodging of an application for asylum in its territory."

The Luxembourg-based court said the legislation restricts “the right of access to applicants for international protection and the right to communicate with those persons,” as well as the right of the migrants themselves to consult a legal advisor or counselor.

The court said the law cannot be justified by the aim of preventing “the assistance of misuse of the asylum procedure and of illegal immigration based on deception.”

The ECJ also found that Hungary had failed to respect EU rules when its authorities rejected an application for asylum because the person had arrived from another member nation when their life or well-being was not in danger.

Human rights group Amnesty International welcomed the verdict, saying it “sends an unequivocal message that the Hungarian government’s campaign of intimidation, targeting those who stand up for the rights of refugees and asylum-seekers cannot, and will not be tolerated.”

“It is now time for the Hungarian government to implement the court’s decision and immediately withdraw this piece of shameful legislation," Amnesty's Hungary director, David Vig, said.

Orban is a steadfast opponent of immigration and has portrayed his country as a bulwark against migration from the Middle East and Africa and a defender of Christianity in Europe.

Hungary's treatment of migrants and refugees has brought it into frequent conflict with many of its EU partners and the European Commission, which as the bloc's executive branch supervises the application of European rules and regulations.

The commission said last Friday that it was referring Hungary to the European Court of Justice for failing to amend its asylum procedures in line with a previous court ruling. The EU Commission recommended a lump- sum fine plus daily penalties until Budapest complies.

The referral came after the court found in December that Hungary had failed to respect EU law by denying people entering the country without authorization the right to apply for asylum and by unlawfully detaining them in “transit zones” on the country's border with Serbia.