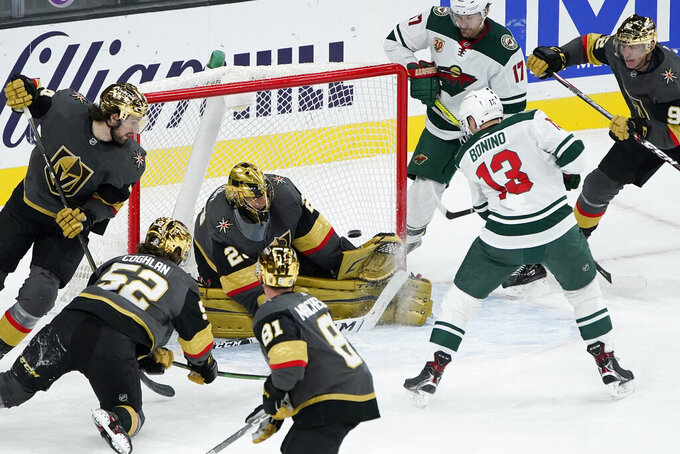 LAS VEGAS (AP) — Max Pacioretty scored twice, including the game-winner in overtime, to lift the Vegas Golden Knights to a 5-4 win over the Minnesota Wild on Monday night.

The Golden Knights erased a third-period, two-goal deficit to earn the victory in a matchup between the West Division’s top two teams.

After Alex Tuch scored the tying goal with 42 seconds left in regulation, it was Pacioretty punching home the game-winner after Vegas captain Mark Stone fed him with his fifth primary assist of the game.

“That was a heavyweight tilt and to come back like that is a big momentum swing for us,” Stone said.

Marcus Foligno scored twice, and Jordan Greenway and Nick Bonino scored for Minnesota. Cam Talbot made 34 saves and dropped to 4-3-0 this season.

The Golden Knights trailed 4-2 when Hague got them within one midway through the third period on a one-timer from the top that Talbot had no chance of stopping.

“It was a strange game,” Golden Knights coach Peter DeBoer said. “Some strange bounces around the net and all of a sudden you’re down. It took us a little bit to regroup. ... We jumbled the lines a little bit (for the third period), went back to some combinations that guys are more familiar with. I thought it took a couple shifts to find a spark. Once they got rolling it was pretty impressive pressure we put on the last 10 minutes.”

The Golden Knights welcomed 2,605 fans inside T-Mobile Arena, the first time in 363 days spectators were allowed inside to watch the team play.

”You could feel the energy during warmups," Stone said. "I think (the fans’ energy) definitely feeds into the way I play the game.”

Added Pacioretty: “I think we all had that feeling where you know you’re gonna come back in that game and use that energy to at least tie it up ... and a big reason for that is the energy we get from our fans.”

Minnesota saw its NHL-best six-game winning streak come to a halt, as it lost for the first time in overtime in eight games dating back to last season. It marked the 14th time in 19 games this season Minnesota has scored three or more goals. The Wild are 12-1-1 in those games. At 6-0-1 since Feb. 18, the Wild have outscored their opponents 31-14 during the stretch.

Glass opened the scoring in the second period when he deflected Stone’s perfectly placed pass into the net for his third goal of the season. All three of Glass’ goals have been on the power play.

The lead didn’t last long as Greenway followed his own shot and buried a rebound Fleury couldn’t freeze in time, tying the game at 1-all.

A little more than a minute later it was Foligno crashing the crease, where he deflected Jonas Brodin’s centering pass from his right skate, to his left knee, and into the net. It was Foligno’s sixth point in his last seven games.

Vegas got its second power-play goal of the night when Chandler Stephenson, Stone, and Pacioretty played tic-tac-toe with an impressive display of passing in front of Talbot. Camped out to the left of Talbot, Pacioretty buried Stone’s pass with the equalizer.

Minnesota took a two-goal lead with a pair of scores 19 seconds apart.

First, it was Bonino taking advantage of Vegas’ inability to clear the puck, as he grabbed the loose puck in front of Fleury and went top shelf. Foligno netted his second of the game when he skated in alone on the left side and beat Fleury far side over his glove.

“They’re obviously a good team, they clearly pushed hard,” Minnesota coach Dean Evason said. “We got back on our heels a little bit and momentum shifted. We didn’t sit back; it wasn’t like we were just trying to defend. We were still trying to push, and they made some good plays.”

Minnesota’s four-goal second period marked the first time this season the Golden Knights allowed four goals in a period. It was just the fourth time the Wild outscored an opponent in the second period.

Minnesota played its first game since goaltender Alex Stalock was claimed off waivers by Edmonton. Stalock set a career high for NHL appearances last season with 38 for the Wild, finishing with a 20-11-4 record, 2.67 goals-against average and .910 save percentage.

The Golden Knights earned their first win wearing their new shiny gold helmets after losing the first two games they wore them.

Minnesota and Vegas wrap up their two-game set Wednesday night.