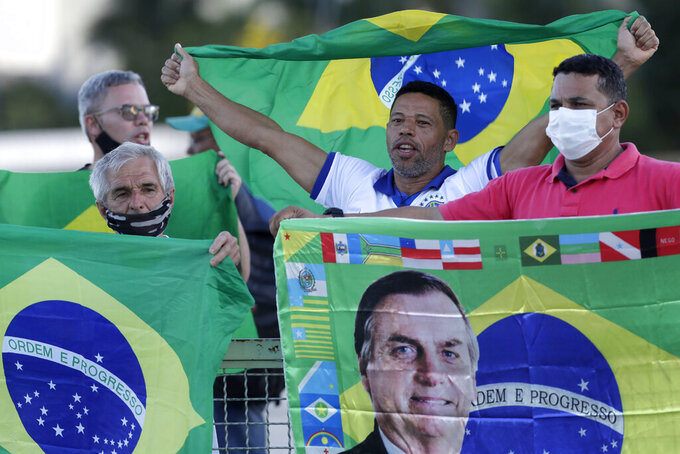 Eraldo Peres, ASSOCIATED PRESS
Demonstrators show their support for Brazil's President Jair Bolsonaro in front of the Planalto presidential palace, in Brasilia, Brazil, Monday, March 29, 2021. President Bolsonaro has undertaken a cabinet reshuffle underscored by recent turmoil in his administration, and who has seen his approval ratings slide this year amid a raging new coronavirus pandemic that has taken the lives of more than 300,000 Brazilians. (AP Photo/Eraldo Peres)

RIO DE JANEIRO (AP) — Brazilian President Jair Bolsonaro reshuffled his Cabinet on Monday amid intense pressure to change his foreign relations minister whose tenure has been characterized by an anti-globalism bent that made him a lightning rod for critics.

In addition to replacing foreign minister Ernesto Araújo, the president shifted three other ministers into new positions — chief of staff, defense minister and attorney general. His announcement on Twitter said he also named a new justice and public security minister and government secretary. The statement did not provide any reasons for the changes.

The shake-up underscores recent turmoil for Bolsonaro, who has seen his approval ratings slide this year. The president in mid-March replaced the health minister, whose tenure coincided with most of Brazil’s 314,000 COVID-19 deaths and became the target of fierce criticism. In February, Bolsonaro tapped a retired army general to take over state-run oil behemoth Petrobras, seeking to appeal to his constituency of truck drivers who had threatened to strike over fuel price increases.

Araújo had most recently faced fierce criticism and calls to resign for comments and actions that his opponents said had impeded faster access to coronavirus vaccines.

Senate insistence became too overpowering for Bolsonaro to withstand, said Maurício Santoro, professor of political science and international relations at the University of the State of Rio de Janeiro.

"The vaccine issue was the spark that lit the fire,″ Santoro said. ″The general context is Araújo failed in all the most important tasks he had to do as a minister. Brazil is facing bad political dialogue with its biggest trade partners — China, the U.S., the EU and Argeninta — all for different reasons.

Araújo is being replaced by Carlos França, who is likewise a career diplomat. Unlike Araújo, França isn't a follower of far-right ideologue Olavo de Carvalho, the newspaper O Globo reported. He is an adviser to Bolsonaro and former ceremonial chief at the presidential palace and is considered to be pragmatic rather than ideological.

By contrast, Araújo has denied climate change, which he has called a leftist dogma, and made comments perceived as critical of China, Brazil’s biggest trading partner. In just over two years, he repeatedly dismayed foreign policy veterans by breaking with Brazil's tradition of multilateralism and adopting policy based on ideology, particularly aligning with the U.S. during the Trump administration.

On Saturday, a group of 300 diplomats published a letter saying Araújo had tarnished Brazil’s image abroad and demanded his removal, according to the newspaper Folha de S.Paulo.

“Don’t let globalism kill your soul in the name of competitiveness,″ Araújo said at his swearing-in ceremony in a speech that was seen as a rallying cry for nationalism. ″Don’t believe globalism when it says having economic efficiency means suffocating the country’s soul and not loving the country.″

Brazil was also one of the last countries in the world to recognize U.S. President Joe Biden’s election victory, and Araújo declined to attend his inauguration. Instead, he took a vacation.

Santoro, the professor, said Araújo's climate change position was an impediment to Brazil dealing with the U.S. and Europe on curbing Amazon deforestation. That issue has been the focus of European governments and many foreign investors, and Biden has said he intends to prioritize the issue.

Early in the pandemic, Araújo wrote on a personal blog that globalists were seeking to use the coronavirus as a means to subvert liberal democracy and market economics in order to install communism and enslave humans. He made other comments that angered China.

Clamor for the minister's resignation grew as Brazil's COVID-19 death toll surged this year and the nation suffered delays in getting active ingredients needed to bottle vaccines, mostly from China. Slow arrival was widely speculated to be political retribution by the Asian power, although both Araújo and Chinese authorities in Brazil claimed technical reasons.

"When the country needed Araújo and the foreign relations ministry to operate to guarantee what we needed to vaccinate people, they kept playing at highly ideological foreign policy,″ said Hussein Kalout, formerly Brazil’s special secretary for strategic affairs and now a research scholar at Harvard University.

Aráujo was subjected to a nearly five-hour Senate hearing last week to defend his ministry's actions during the pandemic. Center-right Sen. Tasso Jereissati told the minister that he no longer had the standing to remain in the post and that his exit would end the help end the crisis.