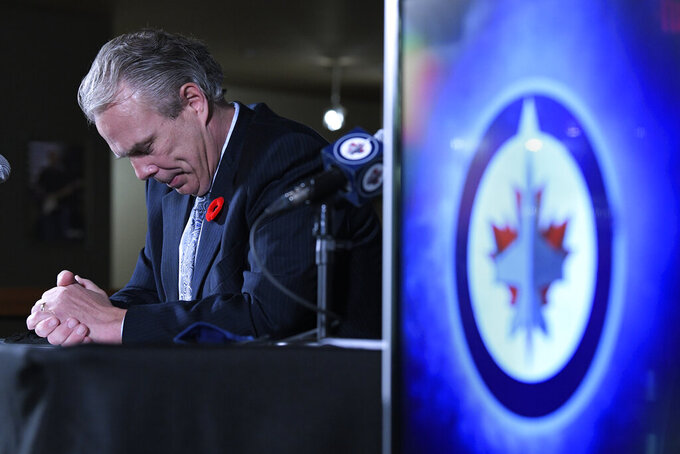 FRED GREENSLADE, ASSOCIATED PRESS
Winnipeg Jets general manager Kevin Cheveldayoff listens to reporters' questions during a news conference with Jets owner Mark Chipman, Tuesday, Nov. 2, 2021, in Winnipeg, Manitoba. The Chicago Blackhawks held settlement talks Tuesday with attorney for a former player who is suing the team after he accused an assistant coach of sexual assault in 2010 and the team largely ignored the allegations. Cheveldayoff was the Blackhawks' GM for two seasons, 2009-2011. The NHL decided not to discipline Cheveldayoff based on his limited role in Chicago’s front office at the time. (Fred Greenslade/The Canadian Press via AP)

The former player who sued the Chicago Blackhawks alleging the team did nothing when he raised allegations of sexual assault against an assistant coach in 2010 has agreed to mediation in hopes of settling the case.

Kyle Beach's attorney, Susan Loggans, confirmed the development Tuesday. She also confirmed the judge in the case had denied her motion to move the case into the discovery phase, which would have opened the way for each side to procure evidence.

Mediation is set to begin in December. Beach is seeking in excess of $50,000 from the team, though the exact amount was not specified. The Chicago Sun-Times first reported the development.

Beach accused video coach Brad Aldrich of sexually assaulting him in 2010 and said the team largely ignored the allegations. An independent review, commissioned by the team in response to two lawsuits as the case exploded in the headlines, showed the Blackhawks badly mishandled Beach’s allegations.

The fallout included top executives losing their jobs in Chicago and stretched to other teams, including Florida, where veteran coach Joel Quenneville — the coach of the Blackhawks at the time — resigned. The NHL fined Chicago $2 million.

Loggans and attorneys for the Blackhawks held settlement talks in early November after the investigation's findings were released, meeting for about an hour. She said after those discussions that “each side had different viewpoints.”

The investigation found no evidence that owner Rocky Wirtz or his son, chairman Danny Wirtz, were aware of the allegations before the lawsuit was brought to their attention this year. Danny Wirtz in October said he has instructed team attorneys to seek “a fair resolution consistent with the totality of the circumstances.”

Loggans also is part of a second lawsuit against the team by a former high school student whom Aldrich was convicted of assaulting in Michigan after he left Chicago. Talks between both sides are continuing over John Doe 2′s pending lawsuit.