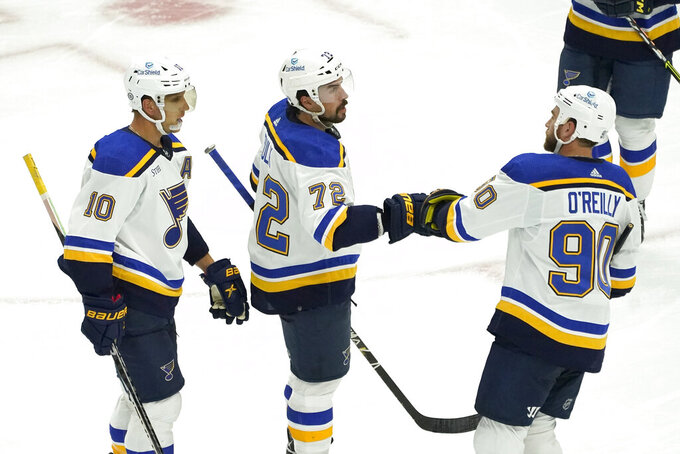 Sure, there are some holdovers, from fiery goaltender Jordan Binnington to tough, talented two-way center Ryan O’Reilly and big defenseman Colton Parayko. But St. Louis now has more speed and skill — and that makes it a threat to win the Western Conference.

“You’re always trying to evolve as the game evolves,” general manager Doug Armstrong said. “I do like our balance. We’ve obviously changed from 2010-16 when I think we were a much heavier team, but it was a much heavier league then, too. I think we’ve just tried to stay current or at least a quarter-step ahead of the crowd.”

The Blues have been among the West’s best for much of the past decade, making the playoffs 10 times in the past 11 years. While Chicago and Los Angeles have dipped since their championships and Colorado got a long runway to its title last season, St. Louis has kept winning consistently.

“What we pride ourselves in is trying to be one of the constants in the Western Conference,” Armstrong said. “We just try and come and do our jobs every day and keep our head down and hopefully let the results speak for themselves.”

That approach remains with no-nonsense coach Craig Berube still in charge, although he has tweaked his systems to keep up with the changing talent on the ice. His team bruised its way through the playoffs in 2019 to win the first championship in franchise history, and now the emphasis is more heavily on holding onto the puck and outskating opponents.

If anything, that has better positioned the Blues, who lost to the Avalanche in the second round, to take another good shot at them.

“I feel like you look at all the top teams now that have won lately, they all have that mix of high offense, high skill and also D-men that can shut it down and play physical,” forward Robert Thomas said. “I think that’s the way all the teams are being built now.”

After adding defenseman Justin Faulk by trade and Torey Krug through free agency since winning the Cup, the Blues more than anything else are built to last.

“Our job, or what we believe in, is just trying to be the best we can be every year,” Armstrong said. “We’re not looking to reinvent the wheel, but we’re also not looking to go back to picking first overall for a number of years.”

Binnington split duties with Ville Husso net last year during the regular season and playoffs before getting injured in the Colorado series. It looks more like Binnington’s net now after Husso was traded to Detroit and veteran Thomas Greiss signed to be the backup.

“Binner’s obviously proven over time that he can be a really good No. 1, but I think the days of having someone play 65, 70 games like the (Martin) Brodeurs and the (Ed) Belfours that did in the past I think are probably behind us,” Armstrong said.

Two of the key pillars of the Cup team still left are going into the final year of their contracts: O’Reilly, now the Blues captain, and Tarasenko, who 14 months ago asked for a trade.

Tarasenko stuck around but could easily bolt after this season. O’Reilly turns 32 in the middle of the season and figures to be prime for an extension, but St. Louis let previous captain Alex Pietrangelo leave in free agency, so there are no guarantees.

Thomas and Jordan Kyrou each signed a $65 million, eight-year extension during the offseason, staying under contract through 2031. Thomas was a point-a-game producer at age 22 and Kyrou at 23, and they’re now expected to lead the way into the future.

“It’s pretty awesome,” Thomas said of signing an identical deal to Kyrou. “He’s such a good player and great person and one of my really close friends, so I’m happy to be in St. Louis with him for so long.

While Kyrou’s game is more predicated on speed, Thomas is a thicker, more physical playmaker who also bulked up with 8 pounds of muscle over the summer.

“After the season, you reflect on what you thought went well and what you thought didn’t go well in the season and try and come up with a little bit of a plan and see if you can tweak your summer to kind of fix those needs,” Thomas said. “Felt like it just helped me in the corners, helped me defensively and be a little more sturdy out there.”

The Blues' longest road trip of the season is a five-gamer in December with visits to Edmonton, Calgary, Vancouver, Seattle and Vegas. Their season-high seven-game home stand comes in January with a back back against the Flames kicking things off and later a showdown against the Tampa Bay Lightning.