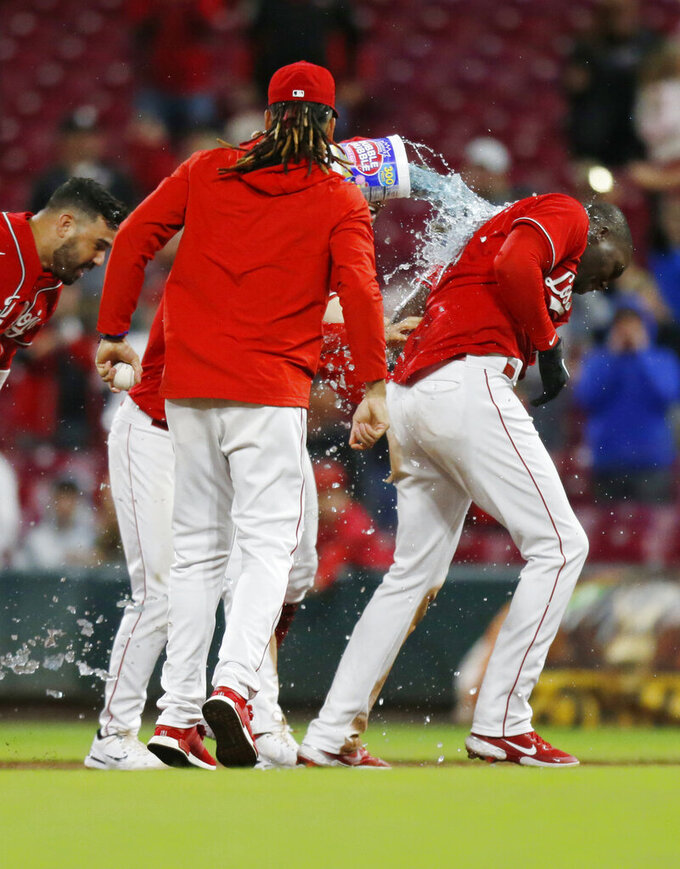 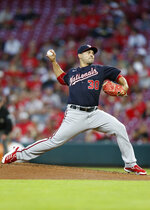 CINCINNATI (AP) — Aristides Aquino drove in TJ Friedl with a game-ending single off the glove of second baseman Luis Garcia, and the Cincinnati Reds beat the Washington Nationals 8-7 in 11 innings Friday night.

“It’s super special," Aquino said. "Any time you can do something to help the team win is pretty special.”

Despite the victory, the Reds fell further behind St. Louis in the race for the second NL wild card because the streaking Cardinals swept a doubleheader from the Chicago Cubs. Cincinnati is six games back of the Redbirds with eight to play — and Philadelphia in between.

Art Warren (3-0) escaped a bases-loaded jam in the 11th with help from an alert defensive play by Joey Votto. The first baseman narrowly beat Garcia to the bag to end the inning after making a backhand grab of his sharp one-hopper.

“It’s definitely a rush," Warren said. "When you pull ahead and take the lead at the end of the game, it’s outstanding. It was one of those back-and-forth games. We’ve had several of those lately. This one went our way.”

“In a moment like that, I’m just trying to focus on waiting for my pitch,” Garcia said. “With two strikes, I was just trying to battle and hit the ball the other way.”

All three of Washington’s ninth-inning hits came with two outs and two strikes.

“We battled back to tie the game," Nationals manager Dave Martinez said. "When you play extra innings, it’s all hands on deck.”

Nick Castellanos went deep in the sixth to tie it and Eugenio Suárez smacked a go-ahead, two-run homer, helping the Reds rally from a four-run deficit to take a 7-4 lead into the ninth.

Suárez was hitting .183 overall but a team-best .333 in September going into the game.

Escobar and Keibert Ruiz each homered to help Washington build a 4-0 lead after three innings.

Ruiz led off the second with his second homer of the season and first since being acquired from the Dodgers as part of the trade-deadline package for pitcher Max Scherzer and infielder Trea Turner.

Soto extended to a Nationals-record 11 his streak of reaching base in consecutive plate appearances with his first-inning walk, breaking a tie with Nick Johnson, who reached 10 straight times in June 2009. Soto pushed the streak to 12 with a walk before striking out.

Reds pinch-hitter Jose Barrero was hit in the left elbow by a pitch in the 10th inning. After a brief visit from an athletic trainer, Barrero stayed in the game to run.