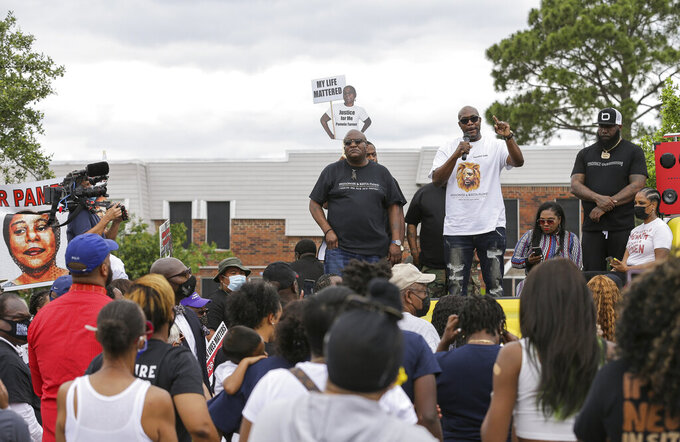 Godofredo A. Vásquez, ASSOCIATED PRESS
Philonise Floyd, the brother of George Floyd, talks to a crowd of supporters during a "Justice for Pamela Turner" rally on the two-year-anniversary of Turner's death, Thursday, May 13, 2021, in Baytown, Texas. Turner was fatally shot in 2019 by a police officer in the Houston suburb after a struggle over his stun gun. (Godofredo A. Vásquez/Houston Chronicle via AP)

BAYTOWN, Texas (AP) — Family members and supporters of Pamela Turner, a Black woman who was fatally shot by a police officer in a Houston suburb, rallied for justice in her name Thursday, the second anniversary of her death.

Demonstrators joined prominent civil rights attorney Ben Crump — who is representing Turner's family and other families of Black people who have died at the hands of police officers — outside the apartment complex in Baytown, Texas, where the shooting happened.

Crump invoked Turner's name April 20, the day former Minneapolis police officer Derek Chauvin was convicted of murder and manslaughter in the death of George Floyd. He vowed then to bring renewed attention to the legal fight in her slaying.

The group of dozens at the rally included family members of other Black people whose names have become rallying cries in the movement against racial injustice in policing, including Floyd, Breonna Taylor and Jacob Blake. They joined the Turner family in demanding the officer accused of killing her be held accountable.

Turner, 44, was killed May 13, 2019, after a confrontation with Baytown Officer Juan Delacruz, in the parking lot of the complex where they both lived. Delacruz shot Turner after the two struggled over his stun gun.

Delacruz was indicted in September 2020 on a charge of aggravated assault by a public servant. If convicted on the felony charge, he could be sentence to up to five years to life in prison. Delacruz is on administrative assignment within the Baytown police department, according to his attorney, Greg Cagle. Cagle has maintained his client's innocence, saying Delacruz was defending himself.

Turner’s family and their attorneys have said she may have been suffering a mental health crisis at the time of the shooting, and that Delacruz knew she had mental health issues. Turner was diagnosed with paranoid schizophrenia in 2005.