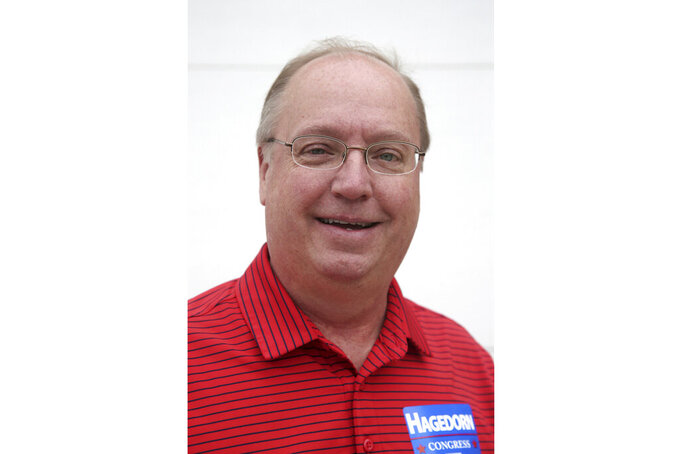 Jim Mone, ASSOCIATED PRESS
FILE - In this June 10, 2018 photo, then, Minnesota 1st District congressional candidate Jim Hagedorn is seen at a parade in Waterville, Minn. Voters in southern Minnesota's 1st Congressional District will choose candidates in a special primary Tuesday, May 24, 2022, in the first step in a complicated process for filling the seat of Republican U.S. Rep. Jim Hagedorn, who died of cancer in February. (AP Photo/Jim Mone File)

MINNEAPOLIS (AP) — Former Hormel Foods executive Jeff Ettinger cruised to victory Tuesday in a Democratic primary to finish the term of the late U.S. Rep. Jim Hagedorn, while Republicans Brad Finstad and Jeremy Munson were locked in a close battle late into the evening.

Finstad, a former state representative, and current state Rep. Munson were well ahead of a crowded field of Republicans eager for a shot at capturing the Republican-leaning seat. The two were separated by just a few hundred votes, with much of Fillmore County still to report.

The winner will meet Ettinger in August to determine who will finish the last few months of Hagedorn’s term. The stakes are likely higher than that, though, with the winners expecting a bump in their chances to win a full term later in November.

“We’re very excited. It’s really an honor to have the trust of the voters in the district,” Ettinger said. “I’m ready for the next stage of the race. I intend to offer the district a non-politician’s alternative — someone who will be inclusive and respectful in representing the district.”

Other Republican hopefuls include Hagedorn's widow, Jennifer Carnahan. Finstad, Munson and Carnahan all played up their admiration for former President Donald Trump while trying to set themselves apart from their rivals.

Trump did not endorse in the race.

Munson portrayed himself as the true conservative in the race, with national endorsements from hardliners such as Sen. Ted Cruz and Rep. Jim Jordan. He narrowly missed endorsement by 1st District Republicans last month.

Finstad, meanwhile, had support from establishment Republicans such as U.S. Reps. Michelle Fischbach and Pete Stauber of Minnesota. He also had the pedigree of serving in the Trump administration as state director for USDA Rural Development in Minnesota.

Carnahan brought baggage to the race, including being forced out as chairwoman of the state Republican Party last year after a prominent donor was indicted on sex-trafficking charges and former staffers complained of a toxic work environment. She also was sued by Hagedorn's mother, stepfather and sister this month in a dispute over money they loaned to help cover his medical bills.

On the Democratic side, Ettinger, who is making his first foray into politics, raised significantly more money than a handful of rivals. Those included University of Minnesota law professor Richard Painter, a former White House ethics lawyer in President George W. Bush's administration, and progressive activist Sarah Brakebill-Hacke.

The process that will follow Tuesday's primary is complicated. The winners will run in an Aug. 9 special general election that coincides with Minnesota's statewide primary the same day.

The winner of the special general election, who will fill out the rest of Hagedorn's term into January, presumably will also win the district’s regular primary that same day. That should give him or her an advantage heading into the November general election, which will determine who holds the seat in the next Congress.

The seat stretches across Minnesota's southern border, and is mostly rural and agricultural except for big population centers in Mankato and Rochester.