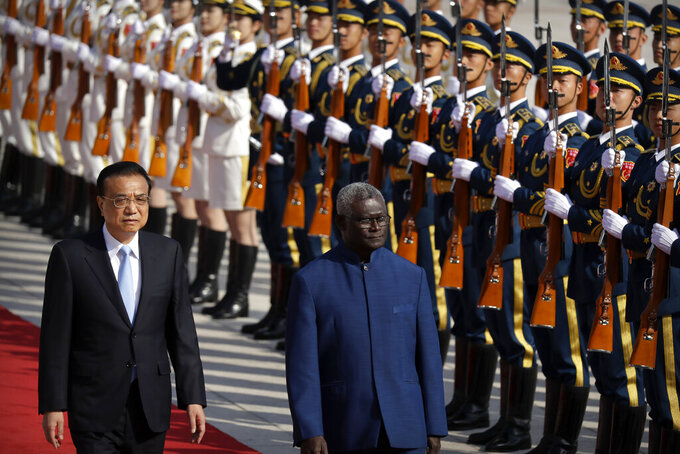 Mark Schiefelbein, ASSOCIATED PRESS
FILE - Chinese Premier Li Keqiang, left, and Solomon Islands Prime Minister Manasseh Sogavare review an honor guard during a welcome ceremony at the Great Hall of the People in Beijing, on Oct. 9, 2019. China’s Foreign Minister Wang will visit Solomon Islands this week in what the South Pacific nation’s leader said was a “milestone” in his country’s relationship with China, amid concerns over their security pact that could allow Chinese military personnel on the islands. (AP Photo/Mark Schiefelbein, File)

BANGKOK (AP) — Chinese Foreign Minister Wang Yi will visit Solomon Islands this week in what the South Pacific nation’s leader said was a “milestone” in his country’s relationship with China, amid concerns that their new security pact could allow Chinese military personnel on the islands.

But Prime Minister Manasseh Sogavare insisted in a statement posted on his government's website Tuesday that the partnership with Beijing does not come at the expense of ties with Australia, the United States and others.

The visit of Wang at the head of a 20-person delegation on Thursday and Friday comes amid growing concerns about China’s influence in the strategically important Solomon Islands. Wang will be the highest-ranking Chinese representative to visit the country since the two nations formalized diplomatic relations 32 months ago, the Solomon Islands Foreign Affairs Ministry said, after Sogavare switched recognition from Taiwan to Beijing.

The Chinese Foreign Ministry said later that Wang would also visit Kiribati, Samoa, Fiji, Tonga, Vanuatu, Papua New Guinea and East Timor in a 10-day trip. While in Fiji he will host a meeting with the foreign ministers of Pacific Island nations, it said.

“It is believed that the meeting will play an important role in promoting solidarity and cooperation between China and the Pacific island countries and in advancing the development of our relations,” Foreign Ministry spokesperson Wang Wenbin said in Beijing.

The security agreement, signed in April, would allow Beijing to send police and military personnel to Solomon Islands “to assist in maintaining social order" and let Chinese warships make port calls for “logistical replenishment." That has raised fears of a possible Chinese naval base on the doorstep of Australia and New Zealand.

Sogavare, who defends the pact as entirely about “internal security,” said Wang’s visit would include the signing of a number of “key bilateral agreements.”

“Prime Minister Sogavare looks forward to a productive engagement with PRC (the People’s Republic of China) as an important development partner at a very critical time in our history,” another statement released Monday said.

Sogavare noted that a New Zealand delegation was also due “in coming months” and that he had hosted high-level visits from Australia, Japan and the U.S. in April.

“My government welcomes all high-level visits from our key development partners," Sogavare said in a statement posted Tuesday.

"We will always stand true to our policy of ‘Friends to All and Enemies to None’ as we look forward to continuing productive relations with all our development partners.”

The news of the visit came as U.S. President Joe Biden met in Tokyo with members of the “Quad” group of nations — the U.S., Japan, Australia and India — which has become increasingly relevant as the U.S. emphasizes security in the Indo-Pacific to counter China's rising influence.

Albanese and Japanese Prime Minister Fumio Kishida, in a one-on-one meeting, expressed concern about China’s security pact with Solomon Islands and agreed to strengthen their cooperation and engagement with Pacific Island countries. Labor has condemned the security pact as Australia’s worst foreign policy failure in the Pacific since World War II.

The U.S., Australia and others had urged the Solomon Islands not to sign the pact with China over concerns it could destabilize the country and set a concerning precedent for the wider Pacific region.

Wang, the Chinese spokesperson, said China hopes the U.S. will “refrain from interfering with the sovereign decisions of the South Pacific island nations on normal cooperation with other countries.”

China pushed back last week at accusations the pact was being used to pressure countries in the Pacific, with another Foreign Ministry spokesperson, Zhao Lijian, saying it was based on mutual respect, and is “conducive to stability and peace, in line with shared interests in the South Pacific.”

“Australia claims the Solomon Islands as its backyard and wants to set a red line,” Zhao said. “Isn't this coercion?”