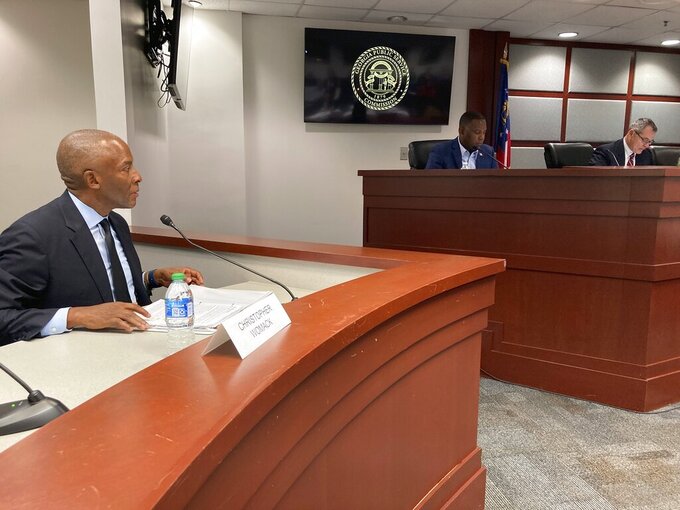 ATLANTA (AP) — State regulators began hearings Tuesday on Georgia Power Co.'s request to raise rates by 12% over the next three years, setting up clashes over how much profit the utility should earn, how much solar panel owners should be paid and how rates should be structured.

The five elected members of the Georgia Public Service Commission are scheduled to decide in December on the company's request to collect a cumulative $2.9 billion more from its 2.7 million customers beginning in January. Changes are likely before any vote.

However, electricity bills are likely to go up even more. Commissioners have already approved plans for the company to increase rates by $3.78 a month when the first of two new nuclear units being built at Plant Vogtle starts generating electricity, likely early next year. A bigger increase could follow the second new reactor coming online, possibly in 2024. Preston Thomas, a staff attorney for the commission, said Tuesday that those combined increases could push bills up $55 or $60 over the next three years.

The unit of Atlanta-based Southern Co. is also likely in February to seek approval for the increased cost of coal and natural gas that fuels power plants. All that could push bills upward more than 15% for customers in 2023 alone.

The commission granted a $1.77 billion cumulative increase in the current three-year rate plan, which began in 2020.

Tuesday saw everyday customers testifying about the harm they believe the rate increases would do, followed by Georgia Power Chairman and CEO Chris Womack taking the stand to justify the request for more money.

Tia Brightwell, a 42-year-old Savannah resident, said her power was cut off three times during the COVID-19 pandemic. She said a rate increase would threaten her ability to operate businesses from home.

Thomas questioned whether the company could have decided to skip asking for increased grid investment, higher return on investment and payments to cover depreciation at the Hatch nuclear plant in Baxley.

“You could have made some of those types of choices,” Thomas said. “They could have lessened the impact, do you agree?”

Womack said Georgia Power understands “that our request has impact on ratepayers” and that it takes changes “very seriously.” But he said that to support customers “these are investments we think we need to make.”

One key fight will be over how much Georgia Power must pay for electricity generated by owners of rooftop solar panels. A 5,000-unit pilot program has filled, and some commissioners have pushed to expand the cap. But Georgia Power says rooftop solar unfairly shifts costs to other customers who don't have panels.

Some consumer groups want commissioners to curtail a Georgia Power rate plan that includes a fixed monthly fee based on a customer's peak usage. Opponents say the demand charge rate plan, the default plan for customers in newly built houses since 2021, unfairly drives up bills.

There will be other fights. The Sierra Club, for example, continues to oppose Georgia Power being allowed to charge ratepayers to excavate or cap coal ash, even though a court ruling says the utility may do so. The company would collect $400 million over three years to cap or excavate ash ponds at coal-fueled power plants. Environmentalists want all the ash excavated and reburied in lined landfills, which could cost even more.

A group of convenience store owners want rates for electricity sold for vehicle charging to be equal to what Georgia Power pays for its own chargers, saying otherwise Georgia Power may dominate the charging market.