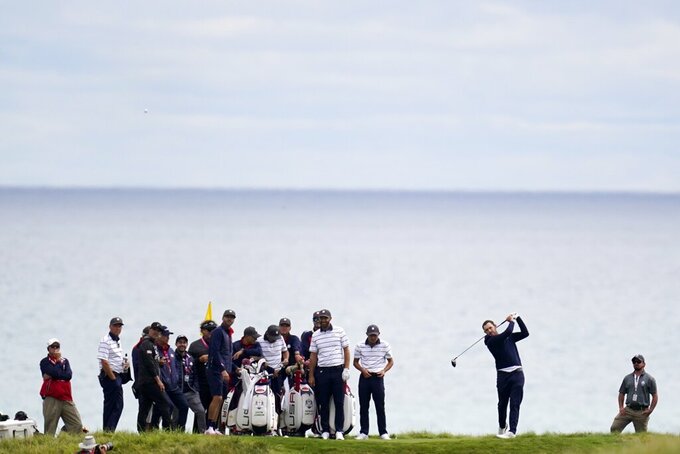 SHEBOYGAN, Wis. (AP) — Bryson DeChambeau is determined to be an exemplary team player at the Ryder Cup, and he wasted no time Tuesday proving his point.

He spoke to the print media, ending a 48-day boycott.

“I think this is a team event. I'm focused on helping Team USA to a victory, and that's honestly the reason why I'm here,” DeChambeau said.

Points aren't awarded based on words. Even so, DeChambeau used his time to dispel a few distractions hanging over the American team as it sets out to try to win back the Ryder Cup from Europe at Whistling Straits.

First of all, his hands are fine and his motivation is strictly on the Ryder Cup.

DeChambeau was quoted in a story on golf.com (with whom he has a financial partnership) saying that his "hands are wrecked” from two-a-day training for the Professional Long Drivers Association World Championships, which starts a day after the Ryder Cup.

That part is difficult to dispute. DeChambeau won the U.S. Open last September with the lowest score ever at Winged Foot. He won again at Bay Hill by nearly driving the green on the par-5 sixth hole, which bends left around a lake. He is No. 7 in the world for a reason.

He also said his beef with Brooks Koepka, which has been going on for two years, is not an issue this week and could be coming to an end.

“A lot of this social media stuff has definitely been driven by a lot of external factors, not necessarily us two,” he said, without offering up what those external factors might be. “We had some great conversations Tour Championship week when we had dinner, and then this week, as well. I sat down and had dinner with him last night, and it was fine.”

He said “something fun” was on the horizon, without giving more details.

Whether he's bashing drives or blowing off all but his own, hand-picked members of the media, DeChambeau has become must-see golf. He says his desire is to showcase his game and his personality. Now it's a matter of making that fit into a team concept. There were times he had to remind himself of that.

Players fanned out across Whistling Straits for the first full day of practice, offering a few hints on potential pairings, some of them obvious.

Jordan Spieth was with Justin Thomas, a partnership that went 3-1 in a losing effort in France, while FedEx Cup champion Patrick Cantlay was with Olympic gold medalist Xander Schauffele, close friends and partners at the Presidents Cup.

Sergio Garcia was in the same group as Lee Westwood — they are 4-1-2 together, while Rory McIlroy was out with Viktor Hovland of Norway, one of three rookies on the European side.

That stems from the latest creative work by Team Europe to inspire a team that keeps winning. Captain Padraig Harrington put together a video he showed his team Monday night to illustrate how special it is to play in a Ryder Cup — only 164 players from that side since 1927, fewer than have been in space or climbed Mount Everest.

He numbered them in alphabetically order — No. 1 was Aubrey Boomer in 1927, No. 164 is Bernd Wiesberger this year — for a video titled “Make It Count.”

“It's something to be very proud of, being able to pull on the clothing with the European team crest on it,” said Lee Westwood (No. 118).

Europe always has been able to count on unity, along with timely putting, in winning nine of the last 12 times in the Ryder Cup.

“There's a lot of continuity in our team, and I think that’s been part of the reason for our success,” McIlroy said.

The U.S. team is relying on new energy with six rookies and its youngest team ever, with an average age of 29. Spieth, Koepka and Dustin Johnson are the only Americans who have played in more than one Ryder Cup.

Still, so much focus in on one player — DeChambeau.

Fans flock to him because they marvel at how he has beefed up his body to swing faster and hit it farther, and that has led to heckling at recent tournaments, the favorite nickname being “Brooksie” because of his spat with Koepka.

“There are times where it’s not comfortable, but there’s also times where it fuels me,” DeChambeau said. “I think this week is going to be an amazing example of it, and it’s going to be fun to be able to have the crowd behind us and pump them up and show them what I can hopefully do — and what we can do as a team more importantly.”

“I’m not going to make this about me again. This is about a team event,” he said. “I’ve got a brass chest. I’ve taken a lot of heat. But I’m OK with it, and I understand I’m in the place where I’m at, and it’s going to be that way moving forward.”

Perhaps a victory would help, or at least contributing points. He was 0-3 in his Ryder Cup debut in France, and he didn't win a match at the Presidents Cup (0-1-1).