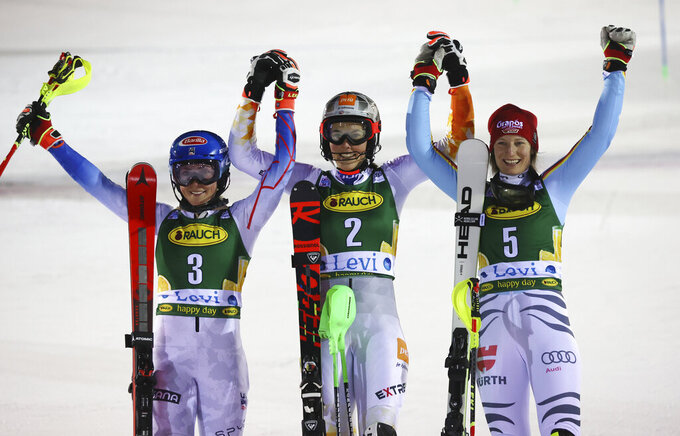 LEVI, Finland (AP) — Practice made perfect for Petra Vlhova on Saturday, beating Mikaela Shiffrin in the first World Cup slalom of the season.

The Slovakian overall champion had been training for three weeks in Finnish Lapland and skipped a parallel event in Austria last week to get ready for the first race in her strongest discipline.

The tactics paid off.

Vlhova posted the fastest time in both runs. She initially lost a few hundredths from her slim lead of .11 over Shiffrin but accelerated near the end of her final run to win by .31 as the pair continued their dominance in the annual event in Finnish Lapland.

No skier other than Vlhova or Shiffrin has won the traditional season-opening slalom since then-overall champion Tina Maze triumphed in 2014. Shiffrin and Vlhova have now each win it four times.

“Here on this kind of slope I like to ski, it’s something special to me,” said Vlhova, who won two slaloms in one weekend here last year.

It was Vlhova's 21st career win and first since working with her Swiss coach Mauro Pini, who replaced Livio Magoni in the offseason.

Magoni had coached Vlhova for five years and the Italian helped her become the first overall champion from Slovakia, but he was forced to leave following unflattering remarks on Vlhova’s style of skiing reportedly made by him in an interview with an Italian newspaper.

“I feel more happy, more free. That’s it,” Vlhova said about working with Pini. “I don't change if I change my coach. I'm still the same. Today was just an amazing day for me as well as for my team.”

Vlhova received her fourth reindeer, a prize for the winner of the race, and said she would name it Michal.

“That is the name of my boyfriend. He is here and he is the love of my life,” Vlhova said.

Having dealt with a back issue that hampered her training over the last few weeks, Shiffrin was made to wait at least one more day in her bid to match the 32-year-old record for most World Cup victories in a single discipline. Currently on 45 slalom wins, the American is one short of Swedish great Ingemar Stenmark’s best mark in giant slalom. Another slalom is scheduled for Sunday.

The American three-time overall champion was gracious in defeat.

“I think it was clear that Petra had, all together, better skiing and better consistency,” said Shiffrin, who's seeking career win No. 71.

“It's easy to start getting greedy and I feel like in order to win races you really have to earn it and I earned the second place today but I didn't quite earn the win."

Shiffrin regained the lead in the overall standings. After three races, she has 180 points and is followed by Andreja Slokar of Slovenia on 168 and Vlhova on 160.

“It was a quite successful day, especially when I look at the last three or four weeks,” Shiffrin said. “I had some good skiing and I had some sections that certainly weren’t perfect but still quite good. It’s always really great to start the season with a podium, so that’s awesome.”

Slokar, who won the parallel event last week, was 1.12 behind in fourth, followed by Anna Swenn Larsson, who was one-hundredth of a second further back in fifth. The Swede returned from a knee injury to compete in her first World Cup race in 21 months.

Austria’s Katharina Liensberger was 1.28 behind in sixth. Liensberger edged Shiffrin and Vlhova to win the World Cup slalom title last season, a few weeks after also winning the world title in the discipline.