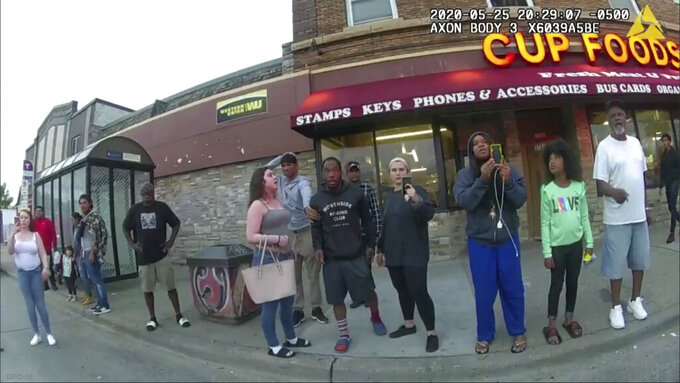 Uncredited, ASSOCIATED PRESS
FILE - In May 25, 2020, file image from a police body camera, bystanders including Alyssa Funari, left filming, Charles McMillan, center left in light colored shorts, Christopher Martin center in gray, Donald Williams, center in black, Genevieve Hansen, fourth from right filming, Darnella Frazier, third from right filming, as former Minneapolis police officer Derek Chauvin was recorded pressing his knee on George Floyd's neck for several minutes in Minneapolis. The Minnesota judge who oversaw the trial of Chauvin is denying prosecutors' request to rewrite his sentencing order as it relates to the four girls who saw George Floyd’s death, saying Tuesday, July 13, 2021, that they may have been emotionally traumatized but that the state failed to prove it. (Minneapolis Police Department via AP, File)

MINNEAPOLIS (AP) — The Minnesota judge who oversaw the trial of Derek Chauvin is denying prosecutors' request to rewrite his sentencing order as it relates to the four girls who saw George Floyd’s death, saying Tuesday that they may have been emotionally traumatized but that the state failed to prove it.

Attorney General Keith Ellison wrote last week that he wasn't seeking to change Chauvin's 22 1/2-year sentence, but he asked Judge Peter Cahill to modify his sentencing order to remove suggestions that the teens and young girl were not traumatized. He cited research showing children process trauma differently from adults, and that adults tend to discount the impact of trauma on Black girls.

Cahill denied that request Tuesday, saying Ellison's mischaracterization of his sentencing order and the “tone and substance” of Ellison's request necessitated a response. Cahill wrote that he never said the four girls were not traumatized, but instead said evidence at trial did not present any “objective indicia of trauma.”

“It is certainly possible that the witnesses experienced some level of emotional trauma from this incident, but the State failed to prove it," Cahill wrote. He also said that while Ellison pointed to research that shows adults view Black girls as less innocent and less in need of protection, no evidence of that was presented prior to Chauvin's sentencing.

“Be that as it may, it is the State that is injecting supposed racial presumptions in this case, not this Court,” Cahill wrote. He said his sentencing order never mentions the race or ethnicity of the girls. He said the youngest, who was 9 years old at the time, and her then-17-year-old cousin are Black, but the other two teenagers, who are now 18, are white.

“Whether ‘adultification’ of ‘Black girls’ is, as the State insists, ‘common in American society, including in the criminal justice system,’ this Court emphatically rejects the implication that it played any part in the Court’s sentencing decision," Cahill wrote.

He also said that while Ellison complains that the court did not hold a separate sentencing hearing, prosecutors had a right to request one but did not.

Ellison's office said Tuesday that it is reviewing the judge's order.

As part of his sentencing order, Cahill noted he had previously found aggravating factors that allowed him to sentence Chauvin to 10 years above the penalty presumed under state sentencing guidelines. He wrote that two of those factors justified a higher sentence: Chauvin’s abuse of his position of trust or authority as an officer, and his particularly cruel treatment of Floyd.

Cahill also found the presence of children at the scene was an aggravating factor, but didn’t justify a longer sentence. He agreed with the defense that the girls were free to leave at any time, and said the prosecution’s evidence didn’t establish that they had been traumatized. He noted that two were seen smiling and laughing as officers kept Floyd pinned down.

But Ellison wrote that Darnella Frazier, who shot a widely seen social media video of Floyd’s restraint, broke down crying on the stand while Alyssa Funari testified she had been unable to return to the scene since.

Cahill said the court is constrained in ways “the media, the pundit class, and prosecutors are not.” He wrote that he can't act on personal opinion, assumptions or presumptions, but has a duty to apply the law to the evidence and facts in the case and impose a sentence that is rational and just, helps to promote public safety and is proportional to the severity of the offense.

He said that during sentencing, he explicitly said Chauvin's sentence was not intended to “send a message." He added the presence of the four underage girls was not a substantial and compelling reason for a longer sentence.