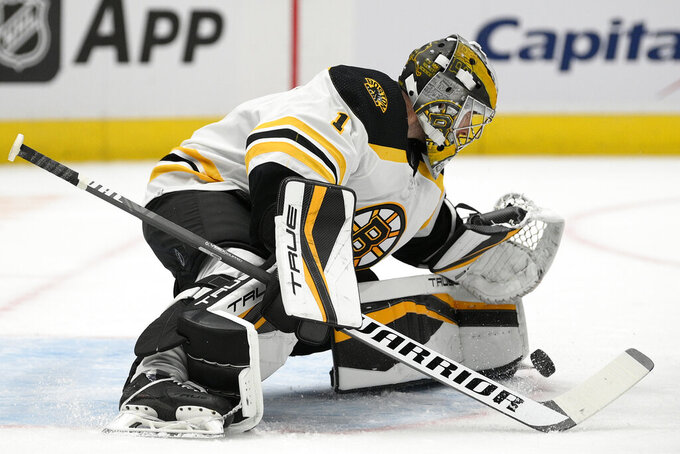 BOSTON (AP) — Zdeno Chara is with another new team. David Krejci is in the Czech Republic. Tuukka Rask remains unsigned while he recovers from hip surgery.

Even as the Boston Bruins say goodbye to the core that went to the Stanley Cup Final three times in nine years, perhaps the most important piece remains — for now. But captain Patrice Bergeron is eligible to become a free agent after the season, and he’s said he wants to play out the year before talking about a new deal.

“I think it’d be useless of me to think about the future,” he said this summer as the Bruins prepared to open training camp. “We obviously want to work toward winning a Stanley Cup. ... So I think that’s where my focus is at right now.”

The previous captain and a perennial Norris Trophy contender, Chara was a major loss — on the blue line and in the locker room — when he left as a free agent last summer. Krecji’s 515 goals in 15 seasons will be hard to replace, and Rask’s injury leaves the Bruins largely untested in the net.

But all of that pales in comparison to what losing Bergeron would do to the Bruins.

A four-time Selke Award winner — and 10-time finalist — as the NHL’s best defensive forward, Bergeron has been a mainstay on the Bruins since he broke in with the team in 2003. Brad Marchand is the only other player remaining from the 2011 Cup champions, though Rask has said he will return at a team-friendly price when he is ready.

“It’s part of life, I guess,” Bergeron said. “Everything matures and changes and you try to go along and try to ride that wave.”

Without Krejci, the Bruins will lean on Taylor Hall, the 2010 No. 1 overall draft pick who was acquired as a midseason rental and signed to a four-year deal. Chara’s loss was tempered by the emergence of Charlie McAvoy as a Norris Trophy contender.

“We have some players that have been around for a while and they’re getting older, but also some younger players that are taking a bigger role,” Bergeron said. “It’s going to become their team at some point soon, and they have to take some more responsibilities and whatnot."

Here are some other issues brewing for the Bruins this season:

Rask, the 2014 Vezina Trophy winner and ’20 finalist, is expected to be out until at least December while he recovers from a torn labrum in his hip.

Linus Ullmark is the more experienced option, making 88 starts over the past three seasons with the Buffalo Sabres and posting a 2.78 goals-against average over parts of six NHL seasons. Jeremy Swayman looked good in a limited role, going 7-3 with two shutouts and a 1.50 goals-against average in 10 games as a rookie in Boston last year.

“I can only go with what Tuukka’s told everyone else, that he’d like to stay and return to Boston," Bruins coach Bruce Cassidy said. “Can it get sticky? It could. And if it does get sticky, we have to do right by the guys who have signed here."

Krejci, the team’s No. 4 scorer last year, is back home in the Czech Republic playing for HC Olomouc, leaving Charlie Coyle as the likely second-line center once he returns from offseason knee surgery. In the meantime, the Bruins could try 2017 second-round draft pick Jack Studnicka there.

“We’re going to miss Krech,” Cassidy said. “But we don’t know his future, either. He hasn’t retired, he’s going back to Czech to play (for) family reasons, and we respect that.”

Another potential option: Krejci himself. Although he went to his homeland so that his kids could experience it, Krejci hasn't ruled out returning.

“Who knows? Down the road, he may want to come back, and I’m sure there will be a conversation if that’s the case,” Cassidy said. “So we’re going to go about our business. ... We’ll see how we can fill that hole and see where David is at later in the season.”

Without Chara last season, McAvoy blossomed into a No. 1 defenseman and finished fifth in the Norris Trophy voting. Matt Grzelcyk and Brandon Carlo are steady, but the Bruins proved to be thin on defense in the playoffs last year.

The Bruins also lost Jeremy Lauzon to the Seattle Kraken in the expansion draft.