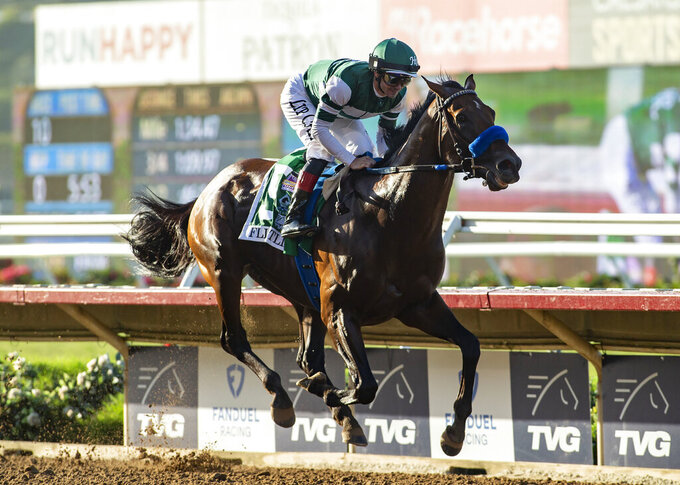 DEL MAR, Calif. (AP) — Flightline dazzled with a record 19 1/4-length victory in the $1 million Pacific Classic. Trainer John Sadler expected as much, he just kept it to himself.

“You can say it after the race, but you can't say it going in or you look like a jerk,” he said.

Flightline's performance at Del Mar on Saturday made Sadler look like a genius for his plan of training the 4-year-old colt up to his first attempt at 1 1/4 miles instead of racing him up to it. He's run just five times in his career and won every time by a combined margin of 62 3/4 lengths.

“This horse is so brilliant you have to space his races apart,” Sadler said. “He's in his own category.”

Flightline took a narrow lead out of the starting gate and briefly dropped to second before moving back in front and stretching his margin to 10 lengths at the mile marker.

“We always said our mantra was, ‘In John Sadler We Trust,’” said Kosta Hronis, one of the colt's several owners. “He knew the right thing to do with this horse.”

Flightline left his five rivals in the dust under Flavien Prat, who flew in from New York and rode four winners on the 11-race card.

“When we went into the final turn, he was traveling so well I asked him to pick it up a little bit,” Prat said. “As soon as I looked back and saw how far in front he was, I wrapped up on him. Obviously, this is the best horse I ever rode.”

“He can go fast and carry it,” said Sadler, who won the West Coast’s richest race for the fourth time in five years. “That's the difference. That's really a rare horse.”

A son of top sire Tapit, Flightline turned heads on the East Coast in June when he won the Met Mile by six lengths.

The victory gives Flightline an automatic berth with fees paid to the $6 million Breeders’ Cup Classic at Keeneland on Nov. 5. Sadler said the colt won't race before then.

Country Grammer, the 7-2 second choice trained by six-time winner Bob Baffert, finished second and paid $2.60 and $2.20. Royal Ship was another seven lengths back in third and paid $2.60 to show.

“We got beat by an incredible horse; it was nice to see the crowd clapping for him,” Baffert said. “It was fun watching the performance even as a competing trainer; it’s something you don’t see every day.”

The race was run in September for just the second time in its 31-year history at the seaside track north of San Diego. The attendance of 12,077 was the second-lowest ever, trailing only the 328 on hand in 2020 when COVID-19 restrictions were in place.