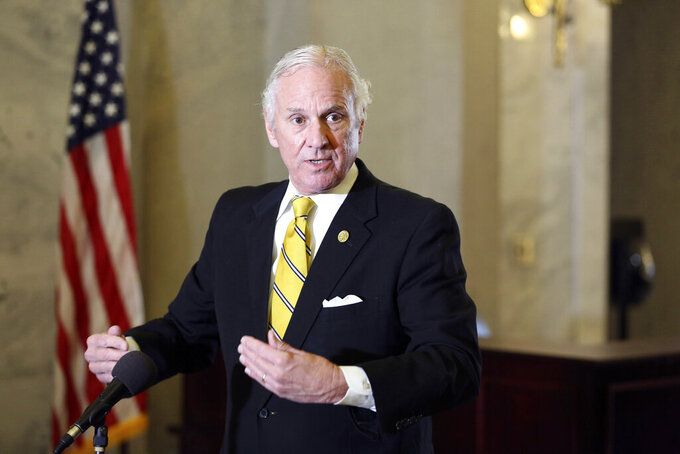 Jeffrey Collins, ASSOCIATED PRESS
FILE - In this Jan. 27, 2021 file photo, South Carolina Gov. Henry McMaster talks about vaccine distribution and abortion during a news conference in Columbia, S.C. McMaster has opened up COVID-19 vaccination to all of the state's residents ages 16 and up, saying Friday, March 26, that they could begin scheduling appointments next week and receive the vaccine starting March 31. (AP Photo/Jeffrey Collins, file)

COLUMBIA, S.C. (AP) — South Carolina Gov. Henry McMaster is making a visit to the U.S.-Mexico border to visit National Guardsmen from the state who are stationed there, according to his office.

McMaster planned to make the trip Friday and Saturday. His office said McMaster would meet with members of the 2-151st Aviation Regiment and 1052nd Transportation Company at a military installation and Customs and Border Protection sector headquarters near the border.

Officials said the Republican governor would also be briefed by members of senior military leadership charged with supporting and supplementing federal efforts to secure the southern border.

News of the visit, announced Thursday, came as U.S. officials said that the number of children traveling alone across the Mexico border reached an all-time monthly high in March.

The increase has coincided with the Biden administration’s decision to exempt unaccompanied children from pandemic-related powers to immediately expel most people from the country without giving them an opportunity to seek asylum.

Some Republican officials have blamed the Biden administration for actions they say are leading more people from Central America to seek entry into the United States.

Late last month, U.S. Sen. Lindsey Graham of South Carolina made a similar trip, a day after introducing legislation to reform what he calls “broken policies and stop abuse of our asylum laws.”

“It’s not a crisis; it’s a complete loss of sovereignty down there,” Graham said.

During his visit, Graham said he saw a facility designed to hold 80 children with about 1,000 in it. He called on the administration to turn away every unaccompanied minor after testing them for “human trafficking abuses.”

For his trip to see the Guardsmen, McMaster said he hoped to "meet with these brave South Carolinians and hear directly from them about their heroic efforts and the challenges they are facing.” There was no word if he would visit some of the juvenile facilities.