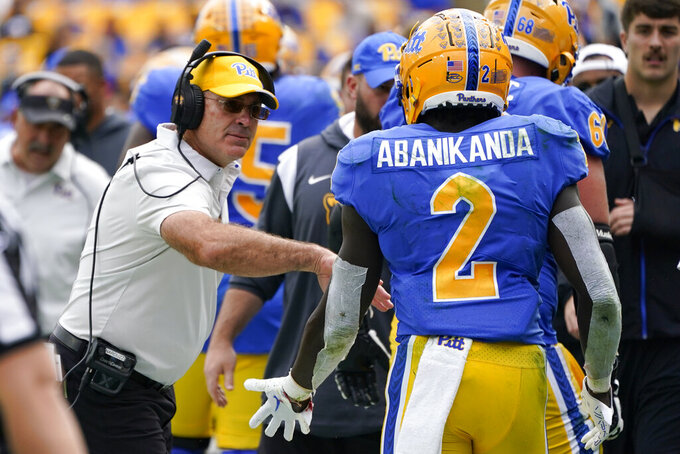 PITTSBURGH (AP) — Pat Narduzzi once appeared to be on shaky ground at Pittsburgh, at least externally. The Panthers slogged to a 5-7 record in his third season in 2017.

Rather than put him on the clock, athletic director Heather Lyke awarded him with a seven-year contract extension, confident in Narduzzi's vision.

It raised eyebrows at the time. Not so much anymore.

The Panthers won their first Atlantic Coast Conference title in 2021 and Narduzzi's 56 career victories are tied for third on the school's all-time list. The coach that's ahead of him in second place at 60? Pop Warner.

Heady territory for a first-time head coach and a program that had seen a revolving door at the position prior to Narduzzi's arrival in December 2015.

“There’s no guarantee(s) in the business,” Narduzzi said. “The key is consistency in this room and our players getting the same information in coaching the heck out of them and loving the heck out of our football team. I think that’s what we do.”

Narduzzi and the 24th-ranked Panthers (3-1) will get an up-close look at how the other half lives on Saturday when Georgia Tech visits.

The Yellow Jackets (1-3) fired Geoff Collins four games into his fourth season and promoted offensive line coach Brent Key. He will get an eight-game audition to land the permanent job for a program that has won just 10 games since Paul Johnson retired following the 2018 season.

“It’s a bittersweet sort of time with what’s happened the past couple of days,” said Key, who was the assistant head coach under Collins. “But we have to move forward. We have a game to play this Saturday.”

Players who have looked overmatched at time during a rocky start that cost Collins his job. The Yellow Jackets have dropped nine straight games to FBS opponents and are averaging just 13.8 points so far in 2021.

He can try to instill a new attitude.

Key said the Yellow Jackets must improve their practice routine if they’re going to be successful on Saturdays.

’There’s a big difference in this game of not wanting to lose and wanting to win,” Key said. “As a player, when you’re sitting back trying not to lose a game, hey, you’re not free to go out and try to make plays. We’re sitting back waiting for something to happen.”

That's rarely been an issue of late for the Panthers, who stormed to the conference title last year behind Heisman Trophy finalist Kenny Pickett, now in the NFL. Pitt appears to be in good hands with USC transfer Kedon Slovis, who has been steady and smart through three starts.

Perhaps just as importantly for the Panthers, they have developed the kind of depth required to series of injuries to the offensive and defense lines as well as at quarterback.

The next test for Pitt is to show 2021 wasn't a one-hit wonder. The test begins on Saturday night against a program that currently finds itself at the opposite end of the spectrum.

The Yellow Jackets have surrendered four blocked punts in their first four games, all of them leading to touchdowns. In his first meetings with his assistants, Key spent 2 1/2 hours discussing ways to shore up the punt protection. He also gave linebacker coach Jason Semore the additional title of special teams coordinator.

“We will be working immediately to fix some issues we’ve had,” Key said.

Pitt may be reclaiming its “RBU” moniker thanks to junior Israel Abanikanda, who leads the ACC in rushing and is averaging 154.6 yards per game over the last three weeks.

Abanikanda has helped the Panthers get off to a solid start despite being forced to use three different quarterbacks in September due to injury. Narduzzi plans to keep feeding Abanikanda hopeful it opens up the passing game.

“Let’s go Izzy, let’s go O-line and let’s get it done which we felt we could do going through August camp,” Narduzzi said. “So that has given us an identity right now. But I still think the identity is to be 50/50 and (we'll) be able to throw the ball too.”