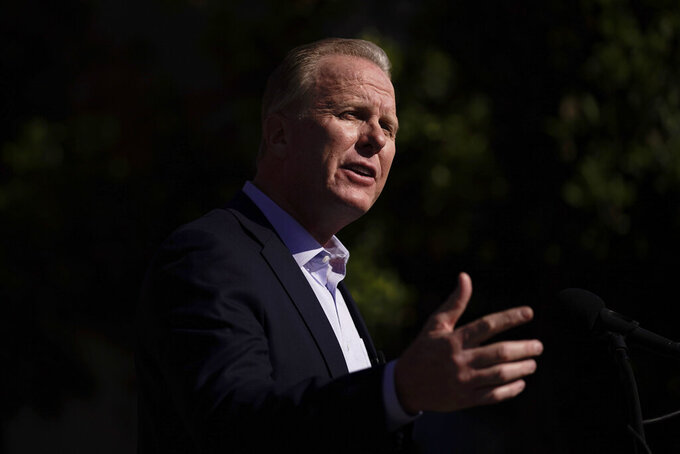 SACRAMENTO, Calif. (AP) — When Kevin Faulconer was San Diego's mayor, his administration failed to follow best practices and conduct due diligence when spending hundreds of millions of dollars on real estate purchases, a city audit found.

The audit released Thursday, reported by the San Diego Union-Tribune, explores four real estate deals totaling $230 million the city entered into under Faulconer's leadership. The auditors wrote "a serious lack of policies and oversight caused the City to miss or skip key steps in the acquisition process" and that Faulconer's administration left out or misrepresented key information.

Faulconer, a Republican, held the seat from 2014 to 2020 and is now running for governor in the upcoming recall election of Democratic Gov. Gavin Newsom. He is pointing to his record in San Diego, the nation's eighth-largest city, as evidence that he is prepared to lead the state of 40 million people and its massive economy. Two of his Republican rivals pointed to the audit as a political problem for Faulconer.

Much of the audit focuses on a building, known as 101 Ash Street, that the city bought with plans to use as a consolidated office space for city employees. But the city only used the property for a few weeks after asbestos was found, the Union-Tribune reported.

The audit faults Faulconer's administration for failing to fully inform the City Council and public about the property. City staff told the council the building would need just $10,000 in repairs, but city contractors later estimated the building needed $115 million in repairs and improvements, the audit found.

Faulconer's administration also relied on a real estate expert, Jason Hughes, who was not under contract with the city and collected $9.4 million from the seller of two properties, including Ash Street, after advising the mayor, the Union-Tribune reported. The auditor faulted Faulconer's administration for working with Hughes without signing a city contract that would have revealed his economic interests.

John Burke, a spokesman for Faulconer's campaign, called the execution of the deal “flawed" in a statement Friday about the audit but blamed it on Hughes “playing both sides of the transaction." He said Faulconer halted payments on the property.

Faulconer “continues to fully support the City’s sustained efforts to hold accountable anyone who wrongfully profited off of taxpayers," Burke said.

But San Diego City Attorney Mara Elliott filed a lawsuit in June seeking monetary and punitive damages, saying he failed to disclose the payments to the city council. The city is looking to void lease agreements and recoup $44 million.

Hughes' attorney, Michael Attanasio, said Faulconer and Elliott are both “outrageously wrong" and that Hughes had approval from Faulconer's administration to seek compensation from other parties.

The administration of Democrat Todd Gloria, the city's current mayor, has accepted some of the auditor's recommendations aimed at improving oversight of real estate deals but rejected others, the newspaper reported.

The audit found issues with three other city real estate deals, including an indoor skydiving facility once owned by one of Faulconer's political supporters that the mayor recommended the city buy.

Businessman John Cox, another Republican running in the recall, said the information contained in the audit should be labeled corruption by Faulconer's administration. Cox made his comments Friday while protesting a possible endorsement vote in the race by the California Republican Party and arguing Faulconer isn't the party's best choice to take on Newsom.

“Mr. Faulconer's handling of real estate and other issues as San Diego mayor would absolutely yield a treasure trove of negative campaign ads," he said.

Similarly, former congressman Doug Ose said: “The Democrats are going to tie that building around his neck and set that on fire."